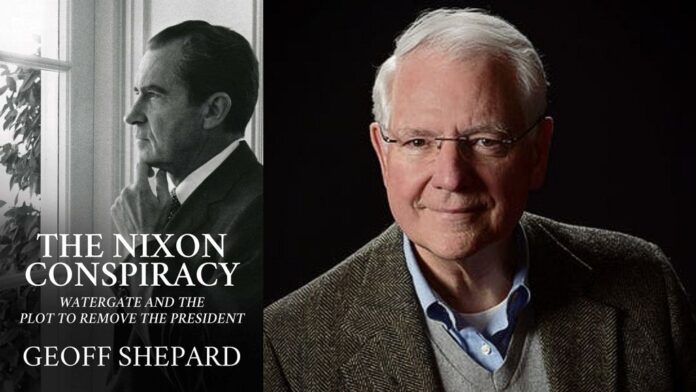 Former White House lawyer Geoff Shepard, who once believed Nixon guilty of Watergate crimes, has uncovered the true story of that infamous scandal, exonerating Nixon in his fact-based, hard-hitting exposé, which is also the basis for his Complaint of Attorney Misconduct filed on October 2 with the Justice Department’s Office of Professional Responsibility.

WASHINGTON D.C. — With the 50th anniversary of the Watergate scandal fast approaching, the truth about one of the biggest political scandals in American history is finally emerging. A deeply researched new tell-all book reveals startling new evidence showing that President Richard Nixon could not have been personally involved in the Watergate scandal as prosecutors secretly alleged, and that the conventional 1974 narrative, set into motion by figures like Bob Woodward and John Dean, does not match the true historical record. Shepard’s meticulous research has uncovered internal documents by Watergate prosecutors, improperly kept hidden for decades, which form the basis for his October 2 Complaint with DOJ’s Office of Professional Responsibility.

Like many Americans, Geoff Shepard, the youngest lawyer on President Nixon’s White House staff, came to believe that the President was guilty of misconduct during Watergate. He coined the label the “smoking gun” when referring to what he found to be the most damning of the Watergate tapes. But as the years went on, Geoff began to uncover new information and was startled to learn that the story we’ve been told was entirely incorrect. White House tapes actually show that Nixon had tried to do the right thing upon learning of the cover-up. But, the President’s many political enemies conspired together, unethically and improperly, to bring the popular Republican President down and invalidate his landslide re-election.

In his new revealing book — The Nixon Conspiracy: Watergate and the Plot to Remove the President (Post Hill Press, October 26) — Shepard, former Harvard-trained White House lawyer and deputy counsel on Nixon’s defense team, gives a detailed and definitive account of the Watergate prosecutors’ internal documents that he has uncovered after years of painstaking research gathered from previously sealed archives. The Nixon Conspiracy exposes prosecutors’ deceptions that convinced the world of President Nixon’s guilt, changing everything we know about Nixon’s involvement in the Watergate scandal.

Shepard reveals the untold story of how a flawed but honorable president was intentionally brought down by a corrupt deep state/big media alliance — a circumstance that looks all too familiar today. If President Nixon had only known then what Geoff has unearthed in the intervening years, he might well have remained in office, dramatically changing the course of history.

In The Nixon Conspiracy, readers will learn:

Praise For The Nixon Conspiracy

“Geoff was in my Criminal Law class in my first year of teaching at Harvard and was clearly paying attention. I take no credit but some pride in his thoughtful insights and analysis of Watergate issues.” — Alan M. Dershowitz, Felix Frankfurter Professor of Law, Emeritus, Harvard Law School

“Geoff is my go-to expert on Watergate. He’s become the nation’s foremost authority on behind the-scenes developments in the White House and the prosecution staff, as the scandal unfolded. Even better, his theses are well-documented.” — Hugh Hewitt, President of the Richard Nixon Foundation

“Geoff and I worked together on President Nixon’s staff. He’s shown dogged determination in uncovering long-secret documents that challenge all we’ve been told about how Watergate unfolded. Geoff’s discovered truths that are emerging at last.” – Dwight Chapin, Author of The President’s Man

“Geoff and I began our careers on the Nixon White House staff and we’ve worked together many times since. The disclosures in his latest book of wrongdoing by the special prosecutors are not just astonishing. They’re jaw dropping, The Nixon Conspiracy is a must read for anyone who cares about the abuse of power.” — KT McFarland, Author of Revolution: Trump, Washington and ‘We the People’

About The Author: Geoff Shepard is a retired corporate lawyer, who is now an author, lecturer and producer. After graduating from Whittier College and Harvard Law School, he served for five years on the Nixon White House staff, rising to associate director of the Domestic Council. He also worked as deputy counsel on Nixon’s Watergate defense team. Shepard is the author of two previous Watergate books: The Real Watergate Scandal (2015) and The Secret Plot to Make Ted Kennedy President (2008). He currently
lives with his wife in the of Philadelphia suburbs. More information is on his website at www.ShepardOnWatergate.com