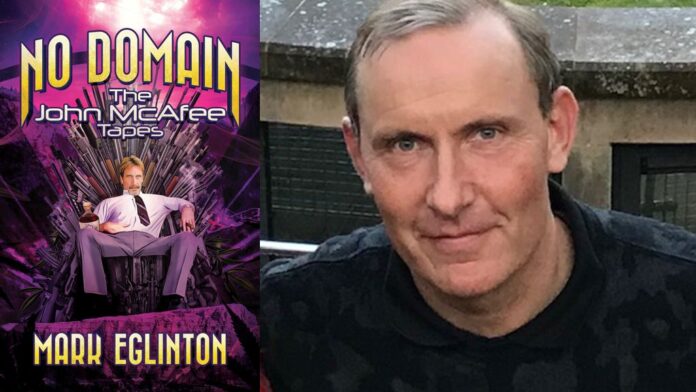 No Domain: The John McAfee Tapes is an exhilarating and uncensored account of the maverick tech titan’s wild life, a breakneck journey from Silicon Valley to his sudden, mysterious death in a Barcelona prison.

Delete everything you think you know about tech pioneer John McAfee, whose antivirus software operates on millions of computers around the world. Uninstall any impressions you have of the man depicted in the news, the man in disguise and on the run in Central America, even the man who reinvented himself as the Libertarian Party’s candidate in the 2016 presidential election. Move these images to your brain’s trash file. The real John McAfee is far more complex.

Drawn from hours of conversations between Mark Eglinton and John McAfee in 2019—while he was hiding in an undisclosed location—No Domain: The John McAfee Tapes provides startling insight into the extraordinary life of one of America’s genuine renegades. McAfee shares his life story like it’s his last will and testament, providing revelatory details on the abusive father who shot himself when John was a young boy; the life-changing LSD overdose in St Louis, during which he was nearly convinced by voices in his head to try to kill his first wife and daughter; the unexpected government clearance that led to him working on CIA dark programs; the combined affinity for mathematics and hallucinogens that informed the hedonistic nature of his software company in Silicon Valley; the attempt to find a quiet life in Belize only to become a pariah in the eyes of the local militia, from whom he’d later flee, having been framed for the murder of his neighbor; and the subsequent years on the run in the US, evading a cast of pursuers, including the Sinaloa Cartel, while burying bags of money and valuables in marked locations around the Southwest, before fleeing the country on his yacht.

John McAfee has lived a life that defies description. This larger-than-life biography documents it all.

Mark Eglinton is a Scottish author and co-writer. His recent books include Blindsided, with former Australian rugby captain and stroke survivor Michael Lynagh, which was shortlisted for International Autobiography of the Year 2016; Heavy Duty: Days and Nights in Judas Priest with musician K.K Downing, one of the top ten music books of 2018 according to Rolling Stone; and Reboot: My Life, My Time with football legend Michael Owen, shortlisted for Autobiography of the Year 2020 by the Daily Telegraph. Among other endeavors, he’s a former professional golf caddie and has written about his experiences for Golf magazine and Golf Digest.