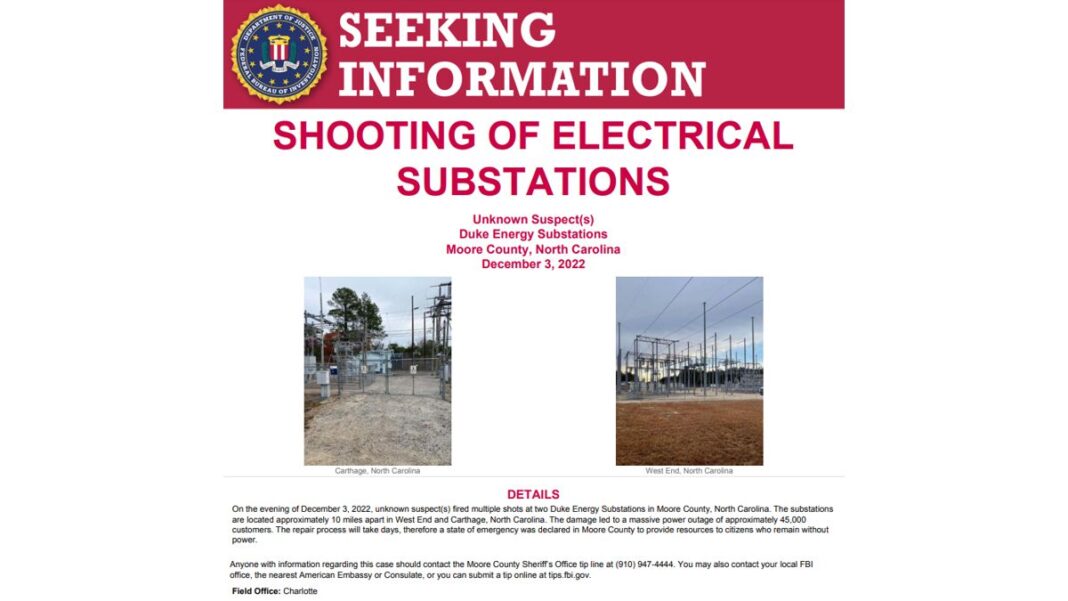 North Carolina Gov. Roy Cooper announced a $75,000 cash reward for information leading to the arrest and conviction of the culprits responsible for the destruction of Moore County electrical substations.

“An attack on our critical infrastructure will not be tolerated,” Cooper said in a statement. “I appreciate the coordinated efforts of law enforcement to leave no stone unturned in finding the criminals who did this and I thank Moore County and Duke Energy for matching the state’s reward for information leading to the arrest and conviction of those responsible.”

State and federal authorities, along with the Moore County Sheriff’s Office, are investigating after a person or group of people opened fire on Duke Energy electrical substations in Moore County around 7 p.m. on Dec. 3.

The attack crippled the utility infrastructure and knocked out power to over 45,000 homes and businesses. The motive for the attack is unknown.

Gov. Cooper, Duke Energy and Moore County joined together to announce a reward of up to $75,000 for information leading to the conviction of those responsible for the destruction of substations in Moore County. If you have information, call (910) 947-4444.https://t.co/3gJjfaxvSH pic.twitter.com/4wcVnib5Ig

According to a press release issued by Duke Energy earlier on Wednesday, all damaged equipment has been fixed. However, it may be many days before electricity is fully restored.

“Equipment damaged from recent vandalism has either been repaired or replaced,” Duke said in a notice. “The restoration of service to those Moore County communities still without power is underway. To avoid overwhelming the electrical system we will bring power back on gradually, with the goal of having the majority of customers restored before midnight tonight.”

The firm had previously stated that it had restored power to around 10,000 customers in Moore County. However, 35,000 people remained without electricity at the time.

Because of the power loss, officials declared a state of emergency and advised locals to avoid the roadways. A curfew was also imposed from 9 p.m. to 5 a.m. ET every night until Dec. 9.