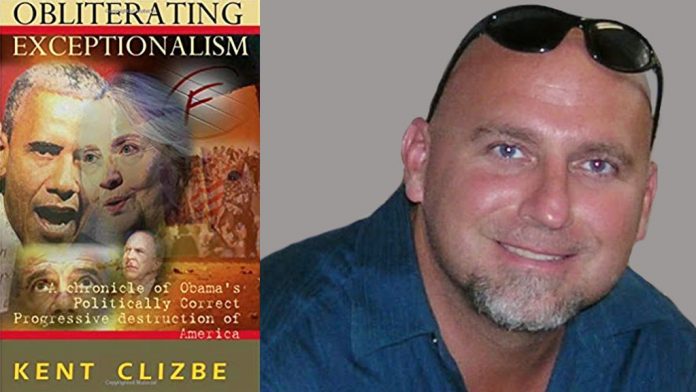 Obama’s administration is the most anti-traditional-America regime ever to hold power in Washington D.C. Kent Clizbe analyzed Obama’s political roots in the run-up to the 2008 election. He continued to provide incisive commentary and analysis as Obama’s handlers governed. Obliterating Exceptionalism is a collection of analytical commentary from the beginning of Obama’s destructive operation against our country. It is the first draft of the history of the first PC-Progressive administration bent on destroying America.

Kent Clizbe is the author of Willing Accomplices: How KGB covert influence agents created Political Correctness, Obama’s hate-America-first political platform, and destroyed America. He is widely published and quoted on counter-PC-Progressive issues. He served as a staff CIA case officer in the 1990s, and as a contractor after 9/11. He has worked in Southeast Asia, Africa, Europe and the Middle East. His specialties are Counter-terrorism and Islamic Extremism.

Kent Clizbe is the author of two hard-hitting exposes of today’s Politically Correct Progressives. In Willing Accomplices, he exposes the origins of the anti-American belief system of the party of Barack Obama. In Obliterating Exceptionalism, Kent lays bare the PC-Progs’ successes in destroying traditional-American values and interests in domestic, international, and military contexts.

Kent worked for many years as a CIA operations officer. He has worked in various capacities in in Southeast Asia, Africa, Europe and the Middle East. His specialty is Counter-terrorism and Islamic Extremism. Kent has also worked Counter-intelligence, Counter-proliferation, Counter-narcotics, and other targets. In addition to extensive liaison work with foreign intel services, he has worked in the US Intel Community in inter-agency, inter-governmental intelligence operations since 9/11.

In 2004, he was awarded the Intelligence Community Seal Medallion, the highest civilian intelligence agency decoration for contractors, for his counter-terrorist operations in the Philippines, Indonesia and Malaysia. His work in the Philippines was featured in an Atlantic Monthly article in March 2007, “Jihadists in Paradise.”

In addition to this professional specialty, Kent has a strong background in Linguistics, foreign languages, Cultural Orientation/Training, English as a Second Language, and Instructional Design. He worked with refugees throughout Southeast Asia, including the Refugee Processing Center in Bataan, Philippines. He has taught at the university level in Saudi Arabia, and did language consulting in England and Italy.

In the US Air Force, Kent was a Vietnamese linguist, completing language training at DLI in Monterey, CA. He served for three years at Clark AB in the Philippines.

An entrepreneur, during the dot.com era, Kent became an executive recruiter. As a headhunter, his specialty is Computational Linguistics and Ontology. He established himself as the world’s premier headhunter in this field, and built several Ontology groups for start-ups. The Wall St Journal used Kent’s expertise to write an extensive article on the subject in 1999, “Not Just Eggheads Any More, Linguists Jump to the Net.”

Kent is also an inventor. He has a patent on a device to stop unattended cooking fires, and is working to educate consumers that they do not have to accept the manufacturers’ lack of a safety device.

Kent’s educational background includes a BA in Southeast Asian Studies-Linguistics from SUNY Excelsior College and an MA in Linguistics and Business from Ohio University, as well as graduate studies in Instructional Design at Southern Illinois University, Carbondale.

He has more or less linguistic expertise in Vietnamese, Italian, Malay/Indonesian, Spanish, and Arabic.