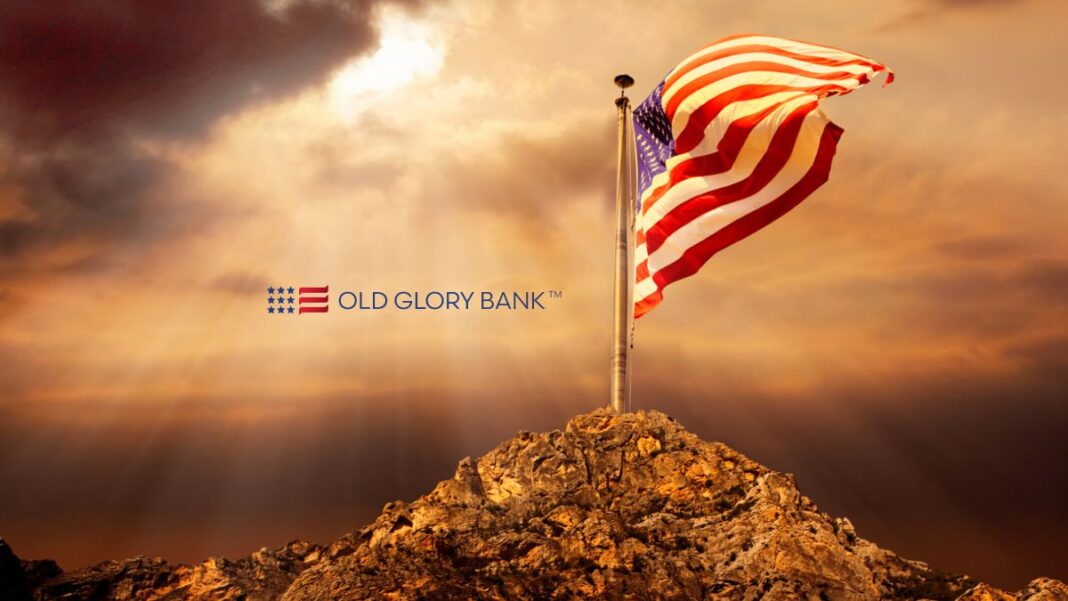 ELMORE CITY, OK— Old Glory Holding Company has cleared regulatory hurdles to purchase First State Bank of Elmore City, Oklahoma, an agreement both sides entered on March 12, 2022, and which the parties intend to close on November 30, 2022. First State Bank was founded in 1903 and will be renamed Old Glory Bank. Old Glory Bank will be a chartered, FDIC insured bank, providing digital-first banking solutions throughout America.

Explains Dr. Ben Carson, who is the former Secretary of Housing and Urban Development, and is a co-founder, stockholder, and member of the Board of Directors of Old Glory Holding Company, “Old Glory Bank will serve lower- and middle-income Americans and those Americans that other banks have marginalized and ignored, hard-working patriots who keep this country running every day.”

Old Glory Bank states it will be the first chartered bank to openly support America, its flag, freedom, patriotism, the military and first responders. Old Glory Bank promises it will never cancel law-abiding customers for their beliefs or for exercising their lawful rights of free speech. Subject to conditions, Old Glory Bank will have no-fee accounts, free overdraft protection, free ATMs, and early direct-deposit access.

First State Bank is Oklahoma’s first and oldest bank. “With the aid of cutting-edge digital technology, we will ‘export’ this bank’s hometown values across the country,” explains Bennett Brown, Old Glory Bank’s Senior Regulatory Officer, who has more than five decades in banking, including as CEO of three community banks and as an OCC examiner. Old Glory Bank’s Chief Financial Officer, Robert Halford, who has been in banking for more than 30 years, reminds us that “People used to select a bank that was closest to their home. Now with our great mobile banking, they can choose the bank that is closest to their identity.”

Radio and television host, author, and filmmaker, Larry Elder, who is also a co-founder, stockholder, and member of the Board of Directors of Old Glory Holding Company, states that “We value the values of America and believe in the principles that forged this country, such as liberty, privacy, security, community, family, and faith.”

Country music superstar, TV host, entrepreneur, and songwriter John Rich, who is also a co-founder and stockholder of Old Glory Bank, adds that “It’s been dismaying to see the political weaponization of the financial system. Old Glory Bank was created to be the full banking solution for folks who still believe in freedom and the greatness of America.”

Maureen Carollo, Chief Compliance and Risk Officer who has more than 25 years in banking and risk leadership, states that this new digital-first bank “was named Old Glory after the name given to the American Flag in 1832 by Massachusetts-born Sea Captain, William Driver. Old Glory Bank, like our flag, represents the fabric of America.”

The Board of Directors includes successful and influential leaders such as former Secretary of Housing and Urban Development, Dr. Ben Carson; radio and television host Larry Elder; former two-term Governor of Oklahoma, Mary Fallin Christensen; marketing executive Tony Dieste; and influential free speech proponent, Dan Schneider. Mr. Clay Christensen, a native Oklahoman and managing partner of Christensen Law Group, P.L.L.C., who is currently the CEO of First State Bank, will join the Board of Directors of Old Glory Bank. All legacy team members at First State Bank will remain and continue to serve their local community that this great bank has served for 120 years.

Old Glory’s Executive Chairman, William Shine, is the former co-president of Fox News and president of Fox Business News, and brings his success in management, operations, and messaging.

Old Glory Bank’s executive team comprises of experienced bank, technology, operational, and marketing executives with hundreds of years of combined experience. Their work began in March of 2021, and over 18 months, this leadership team built the infrastructure and partnered with leading technology providers to prepare for the launch of an industry best digital-first bank to serve America.

One of the many features of Old Glory Bank will be its charitable round-up program where customers have the option to “round-up” to the nearest dollar each time they use their Old Glory Bank cards. One charity for which Old Glory Bank is excited to announce is Folds of Honor, located outside of Tulsa, Oklahoma.

Folds of Honor is a non-profit organization founded by Lt. Col. Rooney who has committed his life to rallying patriotic Americans and meeting sacrifice with hope through the Folds of Honor. Since 2007, they have provided life-changing academic scholarships to the spouses and children of America’s fallen or disabled military. And now, their mission expands to the families of America’s first responders. In Lt. Col. Rooney’s words, “On our watch, the dependents of those who protect our freedoms, and our families will know they are not forgotten.” Moreover, “We could not be more excited to enter into a partnership with Old Glory Bank, an organization that aligns with our values and our collective desire for a better America.”

Old Glory Bank is supported by a broad base of individual investors who believe in the “Old Glory Nation” and who want to bring to market the best digital-first banking solution. Old Glory Bank is a bank for America, that is owned and operated by folks who love this country.

More information about Old Glory Bank is in its Electronic Press Kit, available at https://media.oldglorybank.com and by contacting Ms. Jules Wortman, at jwortman@wortmanworks.com.

Old Glory Bank™ will be a digital-first, chartered, FDIC-insured bank that operates across America. Not a “challenger” bank, Old Glory Bank will be a genuine bank and will be the first chartered bank to openly support America, the flag, freedom, the military, first responders, and most importantly, the hard-working people who make America great – our “Old Glory Nation.” Old Glory Bank™ was created to be your hometown bank, no matter where you call home. A banking solution for those who feel marginalized for believing in the greatness of America. Old Glory Bank was co-founded by some of the leading voices supporting freedom and love of country, including former Secretary of Housing and Urban Development, Dr. Ben Carson; radio and televisions host Larry Elder; former two-term Governor of Oklahoma, Mary Fallin Christensen, and country music superstar, TV host, entrepreneur, and songwriter, John Rich. Old Glory Bank will never cancel law-abiding customers for their beliefs or for exercising their lawful rights. Visit www.oldglorybank.com. “We Stand with You. No Matter Where You Stand.”

About Folds of Honor

Folds of Honor is a 501(c) (3) nonprofit organization that provides educational scholarships to the spouses and children of military members who have fallen or been disabled while serving in the United States Armed Forces. Beginning in 2022, it expanded its mission to include first responders. Our educational scholarships support private school tuition or tutoring in grades K-12, tuition for college, technical or trade school and post-graduate work, including a master’s degree, doctorate, or professional program. Funds for a second bachelor’s degree or trade/technical program certification are also available. Since its inception in 2007, Folds of Honor has awarded about 44,000 scholarships totaling about $200 million in all 50 states. Among the students served, 41 percent are minorities. It is rated a four-star charity by Charity Navigator and Platinum on GuideStar. It was founded by Lt Col Dan Rooney, the only-ever F-16 fighter pilot (with three combat tours in Iraq) and PGA Professional. He is currently stationed at Headquarters Air Force Recruiting Service Detachment 1, at Joint Base San Antonio-Randolph, Texas. For more information or to donate in support of a Folds of Honor scholarship visit foldsofhonor.org