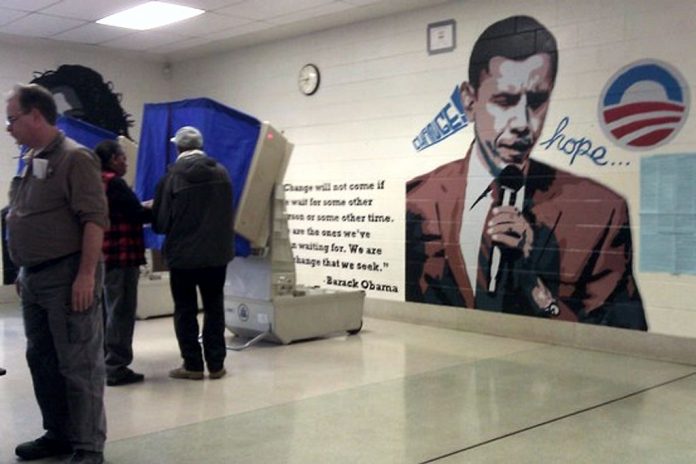 Add together the “Zero Votes For Romney and one hundred percent Votes For Obama” in precincts in Ohio and Pennsylvania, (this IS most curious, if true), and the non-citizens allowed to vote in this last election (who almost uniformly voted democrat) for fear that any effort to prevent them from voting would be instantly labeled “racist”, and the dead people who traditionally vote “early and often” throughout Chicago and Cook County, Illinois (who almost uniformly “vote” democrat), and the living people who regularly vote “early and often” in democrat strongholds all over the country and the Obama Wall Mural which appeared INSIDE at least ONE democrat-dominated voting precinct in the last election and then ask yourself if this is just “happenstance” and “pure coincidence”. Is there something fishy here? And how about the way those dastardly neo-fascist, racist Republicans “stole” the last “Baby Bush” election??? How about their despicable “war on women”? How about their “ignorant” “war on science”? And how about Romney’s Taxes”???

Did you know that if you took away the votes of all the dead people and living people who voted “early and often” in 1960 Chicago and Cook County, Illinois, that Jack Kennedy would have LOST that election to Richard Milhous (that rhymes with White House) Nixon? True, Kennedy won nationally by a scant 100,00 votes, total. A “legal” count in those areas would have swung the election the other way. Then Democrat Chicago Mayor Dick Daley saw to it that things went the Democrat’s way. And where did the current President begin his political career? Chicago, of course. And who was the previous mayor of Chicago? Dick Daley, the Younger, a Democrat. And the current mayor there? Democrat Rahm Emanuel, a former Obama cabinet member. But, hey, no cause for concern, right? And I MUST be racist, for even bringing it up, right? And a bigot. And crazy. And ignorant. And under-educated. And “anything-phobic” you can think of to throw into the mix—right?

My “racism” would come as quite a surprise to the late African-American Democrat, long-time mayor of my hometown who I publicly and passionately defended from a smear campaign aimed against him more than 20 years ago, despite calls and threats from the local Ku Kluckers that I cease and desist. And to the African-American Democrat state senator in Virginia whom I also supported through everything along the way, and still do, despite occasional differences of opinion with HER. This would also come as a surprise to the many African-American residents of my hometown whom choose me to EFFECTIVELY serve them as an advocate before the Redevelopment and Housing Authority for improvements to their homes. So don’t even go there with me, you hear?

These are ALL legitimate concerns and worthy of mention. I hope that all these discrepancies CAN be rationally and convincingly “explained away”. But, as with Nixon years ago, when there was SO MUCH to explain, it never was, and I don’t think things have changed. ~ John Wallace