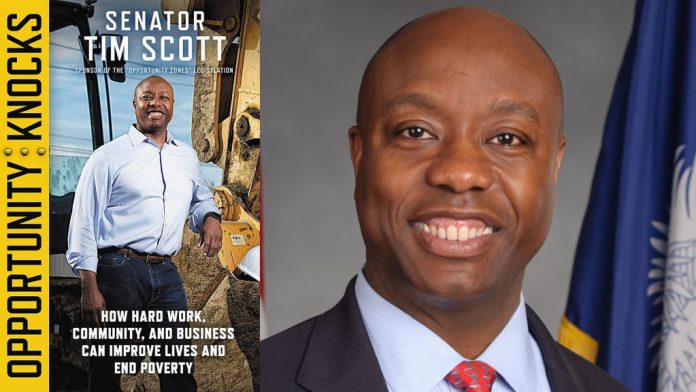 Senator Tim Scott knows adversity. As the son of a single mother from North Charleston, South Carolina, he struggled to get through school and had his dreams of a college football career shattered by a car wreck. But thanks to his mother and a few mentors along the way, he learned that “failure isn’t failure unless you quit.” He also learned that it’s hard work and perseverance, not a government handout, that will get you ahead in life.

Today, Senator Scott is the only black Republican in the Senate, and he believes that investment and commerce are the best ways to rebuild our most impoverished communities. This is the idea behind his signature piece of legislation, the “opportunity zones” program, which President Trump has strongly endorsed. The program provides tax incentives for businesses that invest in low-income urban areas, seeking to replace things like welfare and government assistance.

In Opportunity Knocks, Senator Tim Scott will tell his life story with a focus on adversity and opportunity. He will teach readers about the principles of hard work and hope while addressing the dangers of veering too far toward socialist policies. The book will also not shy away from discussions of racism and racial inequality in the United States and will recount some of Senator Scott’s own brushes with racism as well as the many discussions he’s had with people who want to help, including President Trump.

Tim Scott is a New York Times bestselling author, successful small businessman, and U.S. senator from South Carolina. Having grown up poor in a single-parent household, he has made it his mission to positively affect the lives of a billion people through a message of hope and opportunity. He is the first African American to be elected to both the U.S. House and the U.S. Senate since Reconstruction, and he currently serves on the Senate Committee on Finance; the Committee on Banking, Housing, and Urban Affairs; and the Committee on Health, Education, Labor, and Pensions.