Home Previews Books Our Broken Elections: How the Left Changed the Way You Vote 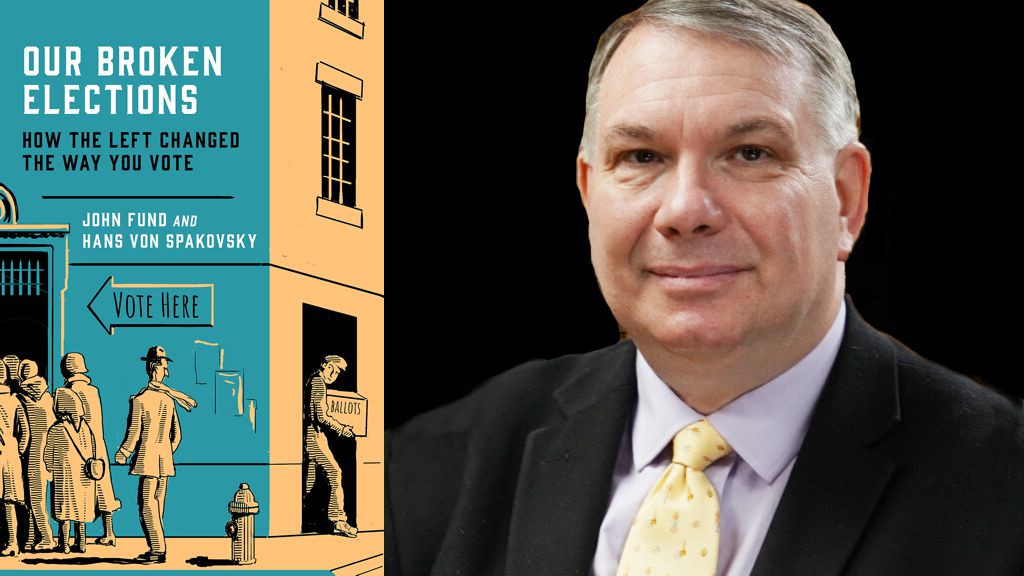 Behind the deeply contentious 2020 election stands a real story of a broken election process. Election fraud that alters election outcomes and dilutes legitimate votes occurs all too often, as is the bungling of election bureaucrats. Our election process is full of vulnerabilities that can be ― and are ― taken advantage of, raising questions about, and damaging public confidence in, the legitimacy of the outcome of elections. This book explores the reality of the fraud and bureaucratic errors and mistakes that should concern all Americans and offers recommendations and solutions to fix those problems.

“The comprehensive new book by Hans von Spakovsky and John Fund is a timely look at the systemic problems in our election process, including voter fraud, the rushed and ill-advised changes made in the 2020 election process, and the influence and tactics of a well-funded group of liberal activists seeking to undermine the electoral process in the guise of voter access. I highly recommend it for those seeking real information about one of the most important topics concerning our democracy: maintaining fair and honest elections.” ―Hon. Edwin Meese III, 75th attorney general of the United States

“Partisan officials and the courts shouldn’t be allowed to change the rules meant to provide safety and security or to usurp the role of state legislatures. I highly recommend this thoughtful and well-researched analysis of some of the issues threatening the integrity of our elections today.” ―Ruth Johnson, former Michigan Secretary of State, current chair of State Senate Election Committee

“Preservation of our democratic Republic requires fair and secure elections.  John Fund and Hans von Spakovsky, two of the country’s leading experts on elections, explain in shocking terms the threat we face from those who are working hard to make our elections unfair and unsecure.  This book should be read by everyone who cares about protecting the integrity of our elections and ensuring the ability of the American people to govern their nation.” ―Mike Lee, U.S. Senator, Utah

“I have been warning for years how American Marxist Movements are destroying our country. This new book by John Fund and Hans von Spakovsky exposes how they are changing the rules governing our elections to make it easier to manipulate election results so they can consolidate their political control.  It is a clarion call about the danger we face in our elections and how these radicals want to bring back the worst corruption of the political machines of the last century.” ―Mark Levin, best-selling author and host of Life, Liberty & Levin on Fox News

“Our Broken Elections perfectly captures many of the specific examples as to why the 2020 general election was not the safest and most secure election in our nation’s history. This outstanding work by John Fund and Hans von Spakovsky identifies ways that governors, secretaries of state, local election officials, and private citizens sacrificed election security, transparency, and accountability for accessibility and availability of the ballot to the detriment of the republic. This book will both educate and arm you for the discussions that will be advanced in the next election cycle and several elections to come. You will also learn why we should be working to make it easier to vote and harder to cheat all across America.”― John H. Merrill, Alabama secretary of state

John Fund is National Affairs Columnist for National Review magazine and a contributor to the Hotline newsletter. He is an often-quoted expert on American politics and the interconnections between politics, economics and legal issues. He previously served as a columnist and editorial board member for the Wall Street Journal for 27 years. Roll Call, the newspaper of Capitol Hill, called him “the Tom Paine of the modern Congressional reform movement.”

Hans von Spakovsky is a Senior Legal Fellow and Manager of the Election Law Reform Initiative at The Heritage Foundation. He has been involved in the election process for three decades. He served on a presidential advisory commission on election integrity and is a former Commissioner on the Federal Election Commission. He served as Counsel to the Assistant Attorney General for Civil Rights at the U.S. Department of Justice enforcing federal voting rights law and served as a county election official administering elections in both Georgia and Virginia.