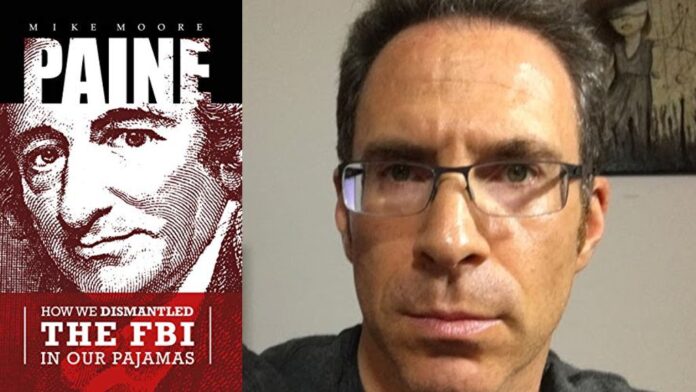 SWAT-clad FBI agents stormed into Mike “Thomas Paine” Moore’s home and terrorized his wife and young children at gunpoint after rousting them out of bed. Not once, but twice, pointing automatic weapons at the family. Historic, costly blunders for the FBI.

In response Paine assembled his journalism crew of former feds, launched True Pundit and literally dismantled the FBI in less than two years with pens and laptops while working from home, often in pajamas.

While the mainstream media ignored a corrupt FBI & DOJ, Paine and cohorts hammered away and knocked the FBI off its trusted public mantle. Revered FBI leaders were fired. Others quit. FBI officials, targeted by True Pundit’s hard-hitting reporting, are now targets of numerous federal investigations. A fitting irony after the FBI — whom Paine worked for — came into his home with M4 rifles drawn on his young kids and wife. Twice. Then, the FBI went on a rampage to ruin his Fortune 100 career at Citi and even prevented him from attending his mother’s funeral.

What did Paine know that terrified the Deep State and prompted FBI agents to stoop so low as to literally terrorize an 8-year-old and 12-year-old? And Paine’s wife? In PAINE: How We Dismantled the FBI In Our Pajamas, Mike Moore tells it all here — revealing he was investigating Intel that the FBI, CIA & White House were covering up evidence that Osama bin Laden was living and running al-Qaeda from Iran after 9/11. Paine reveals his True Identity: Loeb Award-winning & Pulitzer nominated newspaper reporter and Intel expert Mike Moore.

And his insider revelations about bin Laden — and the Bush and Obama White Houses — are not pretty as they blow the roof off one of the most sinister, gut-wrenching scandals in U.S. history, involving Democrats and Republicans.

Implicated too here are U.S. Special Counsel Robert Mueller along with former CIA Director John Brennan, among many others. A Criminal conspiracy involving top players in the Deep State, entrenched in one of the greatest public betrayals imaginable.

They tried to silence Paine and ruin him to keep these alarming revelations secret but something went wrong. Paine rose from the ashes of his battered life and tattered financial career and then re-launched his award-winning journalism career. And this time — playing by his own rules — Paine blows the lid off of a massive cover-up that implicates the same D.C. elite who tried to take him down.

You may have heard the prophetic warning that “One Day You’re Going to Mess with the Wrong Guy.”

In ‘How We Dismantled the FBI in Our Pajamas,’ Paine proves he is THAT guy. And the FBI — or what’s left of it now — surely regrets the days it threatened Paine’s wife and children at gunpoint, miscalculations that ultimately rocked its foundations unlike any FBI scandal in American history.

Mike “Thomas Paine” Moore today serves as True Pundit’s chief Muckraker. Moore/Paine previously worked for the FBI, White House, DEA among many other Intel agencies and private concerns. He is the recipient of the coveted Gerald Loeb Award for journalism and 2-time Pulitzer Prize for Investigative Reporting nominee. As a Certified Fraud Examiner, Moore previously headed anti-money laundering operations for Citi in Chicago, Los Angeles and Delaware. He has an expertise in covert telecommunications, counterintelligence, HUMINT, and OSINT intelligence gathering.