McCarthy threatens to yank all recommendations in response

Reps. Jim Banks (R-Ind.) and Jim Jordan (R-Ohio) were rejected from serving on a select committee formed to probe the Jan. 6 U.S. Capitol breach, the top Democrat in the lower chamber said Wednesday.

House Speaker Nancy Pelosi (D-Calif.) said she made the decision in light of Banks and Jordan objecting to electoral votes during the joint session of Congress held on Jan. 6.

“With respect for the integrity of the investigation, with an insistence on the truth and with concern about statements made and actions taken by these Members, I must reject the recommendations of Representatives Banks and Jordan to the Select Committee,” Pelosi said in a statement.

“Speaker Nancy Pelosi has taken the unprecedented step of denying the minority party’s picks for the Select Committee on January 6. This represents an egregious abuse of power and will irreparably damage this institution. Denying the voices of members who have served in the military and law enforcement, as well as leaders of standing committees, has made it undeniable that this panel has lost all legitimacy and credibility and shows the Speaker is more interested in playing politics than seeking the truth,” he said in a statement.

“Unless Speaker Pelosi reverses course and seats all five Republican nominees, Republicans will not be party to their sham process and will instead pursue our own investigation of the facts.”

Jordan added, “Speaker Pelosi just admitted the obvious, that the January 6th Select Committee is nothing more than a partisan political charade.”

Pelosi announced the formation of the panel after Republicans in the Senate blocked a bill that would have created a 9/11-style commission to investigate the breach.

Every Democrat and two Republicans voted last month to create the select committee.

She gave McCarthy the ability to recommend five other representatives for the committee. 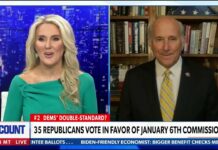