In total, the shares are worth between $1 million and $5 million.

At the same time, Paul Pelosi also sold portions of his Apple and Visa holdings, according to the speaker’s disclosure.

The move to purchase Nvidia stock in June raised questions about whether the financier had insider knowledge about the legislation, while Pelosi has drawn scrutiny in recent months over her husband’s moves in the stock market.

However, Pelosi’s spokesman Drew Hammill told media outlets at the time that the speaker “has no prior knowledge or subsequent involvement in any transactions,” while adding that she also “does not own any stocks.”

“To be clear, insider trading is already a serious federal criminal and civil violation and the Speaker strongly supports robust enforcement of the relevant statutes by the Department of Justice and the Securities and Exchange Commission,” Hammill also said.

A Business Insider analysis from 2021 found that Pelosi is the 14th wealthiest member of Congress, with an estimated net worth of at least $46 million. 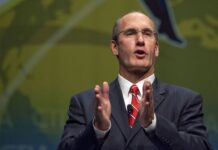