Pope Francis has said Moscow’s invasion of Ukraine was “perhaps somehow provoked” as he recalled a conversation in the run-up to the war in which he was warned NATO was “barking at the gates of Russia”.

In an interview with the Jesuit magazine La Civiltà Cattolica, conducted last month and published on Tuesday, the pontiff condemned the “ferocity and cruelty of the Russian troops” while warning against what he said was a fairytale perception of the conflict as good versus evil.

Francis added that a couple of months before the war he met a head of state, who he did not identify but described as “a wise man who speaks little, a very wise man indeed … He told me that he was very worried about how Nato was moving. I asked him why, and he replied: ‘They are barking at the gates of Russia. They don’t understand that the Russians are imperial and can’t have any foreign power getting close to them.’”

He added: “We do not see the whole drama unfolding behind this war, which was, perhaps, somehow either provoked or not prevented.”

Shortly before the invasion, Vladimir Putin had demanded NATO rule out allowing Ukraine, which borders Russia, into the military alliance. 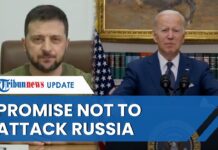