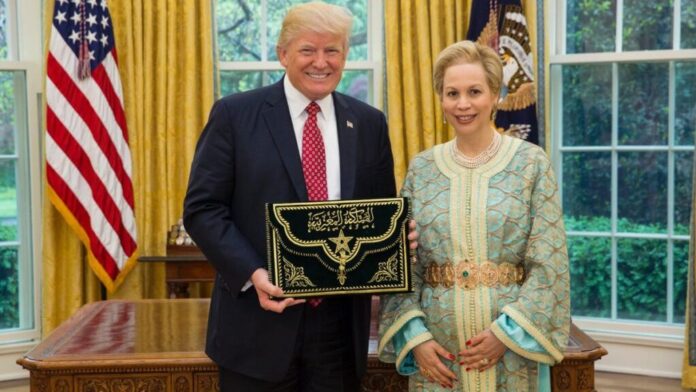 On Friday, January 15, 2021 a senior White House official told Reuters that President Donald Trump received Morocco’s highest award, the Order of Muhammad, for his work in advancing a normalization deal between Israel and Morocco which allowed Rabat and Tel Aviv to restore relations.

Morocco’s Ambassador to the United States, Princess Lalla Joumala Alaoui, gave President Trump the Order of Muhammad award in the Oval Office of the white house. The ceremony was privately held. This award is given only to heads of state and was a gift from Morocco’s King Mohammed VI.

White House senior adviser Jared Kushner and Middle East envoy Avi Berkowitz were also honored with other awards for their work in helping to restore relations between Morocco and Israel that took place in meeting in December 2020.

Morocco announced its decision to establish diplomatic ties with Israel on December 10. The decision included vows from Tel Aviv and Rabat to see their cooperation advance at all levels, including trade.

The two countries also plan to reopen their liaison offices, and will launch direct fights in the two or three coming months.

On December 22, Morocco, Israel, and the United States also signed a Joint Declaration officializing the diplomatic relations between Rabat and Tel Aviv.

The United States received applause from Israel for its peace efforts in the last five months, which enabled Tel Aviv to restore relations with several countries, including Bahrain, the UAE, Sudan, and Morocco.

Morocco and the United States share strong diplomatic relations, and both countries are vowing to strengthen cooperation.

President Trump vowed that more countries will join Bahrain, the UAE, Sudan, and Morocco in the future, including Saudi Arabia as Jared Kushner and his team work on reaching more agreements between Israel and the Arab world which, it’s hoped, will continue in the next administration.