Home Previews Books Presidential Takedown: How Anthony Fauci, the CDC, NIH, and the WHO Conspired... 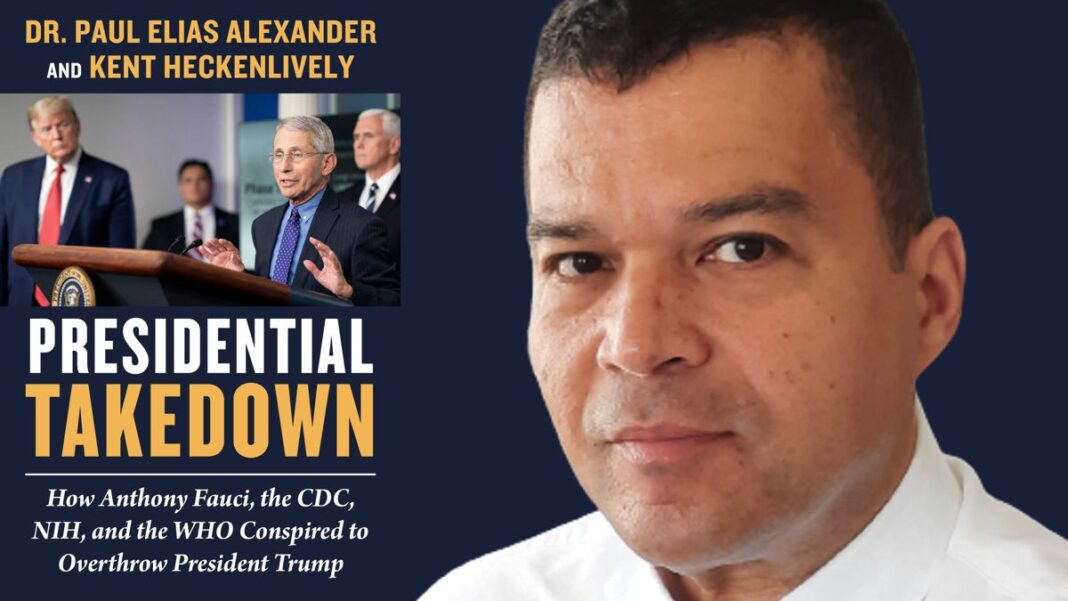 Presidential Takedown is an explosive behind-the-scenes look at Donald Trump’s final months in office and how the COVID crisis response was a carefully crafted plan to ruin him.

In January 2020, Donald Trump was on the fast track to an easy re-election. While his first two years had been stymied by House Speaker Paul Ryan, Senate Majority Leader Mitch McConnell, and the Democrats, his third year had been one of remarkable success. The United States had low unemployment and was making strides across the globe. The president’s rallies were well-attended, and he was being projected to win four hundred electoral votes and about forty-five states. Then came COVID-19.

Dr. Paul Elias Alexander, former Senior Advisor to COVID Pandemic policy in the US government for President Trump and former COVID Pandemic evidence-synthesis advisor to WHO-PAHO, was on the frontlines to watch how Trump’s world, and his reelection hopes, slowly collapsed leading up to November 2020—due to the CDC, NIH, and WHO conspiring to overthrow him with the worst response possible to the COVID crisis.

Supported by emails and documents, career epidemiologist Alexander and New York Times-bestselling author Kent Heckenlively, JD, will not only show proof of a presidential takedown, but also of the personal vendetta of the CDC and HHS against Alexander himself. From unnecessary lockdowns, school closures, and mask mandates to the dismissal of effective treatments like hydroxychloroquine, ivermectin, and vitamin D and even threats against President Trump and his family, Presidential Takedown: How Anthony Fauci, the CDC, NIH, and the WHO Conspired to Overthrow President Trump is the inside story of what really happened from those first COVID-19 reports to President Trump’s “loss” in November.

Dr. Paul E. Alexander, PhD, has expertise in teaching of epidemiology (clinical epidemiology), evidence-based medicine, and research methodology. He is a former COVID Pandemic evidence-synthesis advisor to WHO-PAHO, former Senior Advisor to COVID Pandemic policy in the US government, Health and Human Services (HHS), and a former Assistant Professor at McMaster University in evidence-based medicine. He worked/was appointed in 2008 at WHO as a Regional Specialist/Epidemiologist in Europe’s Regional Office in Denmark (nations assigned in WHO’s project were Russia, Turkey, Ukraine, and Poland). He was employed from 2017 to 2019 at the Infectious Diseases Society of America (IDSA), in Virginia, as the evidence synthesis meta-analysis systematic review guideline development lead/trainer.

Dr. Alexander worked for the government of Canada as an epidemiologist for twelve years, appointed as the Canadian in-field epidemiologist (2002-2004) as part of an international CIDA funded, Health Canada executed project on TB/HIV co-infection and MDR-TB control (involving India, Pakistan, Nepal, Sri Lanka, Bangladesh, Bhutan, Maldives, Afghanistan, posted to Kathmandu). Dr. Alexander is currently an independent academic scientist and COVID-19 consultant researcher. He is also informally providing support to some members of the US Congress. Visit DrPaulAlexander.com

Kent Heckenlively, JD, is an attorney, science teacher, and New York Times bestselling author. His books have sold more than a quarter of a million copies and have been translated into several languages. He is quickly gaining a reputation as one of the most fearless corruption fighters of our time. Visit KentHeckenLivelyBooks.com