A teacher who wore a “Make America Great Again” hat to school was engaging in constitutionally-protected free speech, a U.S. appeals court has ruled.

Eric Dodge, the teacher, wore the hat to two days of teacher trainings in 2019 at schools in Washington state, taking it off before entering the buildings but setting it near him.

Caroline Garrett, the principal of one of the schools, Wy’East Middle School, told Dodge on the first day to “use his better judgement.” On the second day, she allegedly said, “What is the [expletive] deal with you and your hat!” and called the teacher a racist and bigot before telling him to bring his union representative the next time they spoke.

In respond to Dodge’s lawsuit claiming constitutional violations, Garrett said she was motivated by a desire to prevent disruptions to the school, which employed Dodge as a science teacher.

But Dodge’s wearing the hat was speech protected by the U.S. Constitution’s First Amendment, a panel of the U.S. Court of Appeals for the Ninth Circuit said in its Dec. 29 ruling.

Several people attending the trainings complained about the hat but nobody, including the principal, presented evidence that Dodge had disrupted school operations.

“Political speech is the quintessential example of protected speech, and it is inherently controversial. That some may not like the political message being conveyed is par for the course and cannot itself be a basis for finding disruption of a kind that outweighs the speaker’s First Amendment rights,” Forrest said.

The panel consisted of Circuit Judge Forrest; Circuit Judge Michael Hawkins, a Clinton appointee; and Jane Restani, a Reagan appointee who sits on the U.S. Court of International Trade.

“The Court correctly found what Ms. Gomes and EPS have said all along – they did not retaliate in any way against Mr. Dodge. Ms. Gomes and EPS are happy to have this matter behind them,” Michael McFarland, a lawyer for Evergreen Public Schools (EPS) and Janae Gomes, a human resources official for the district, told The Epoch Times via email.

A lawyer for Dodge did not return an inquiry. 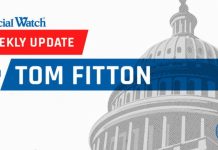