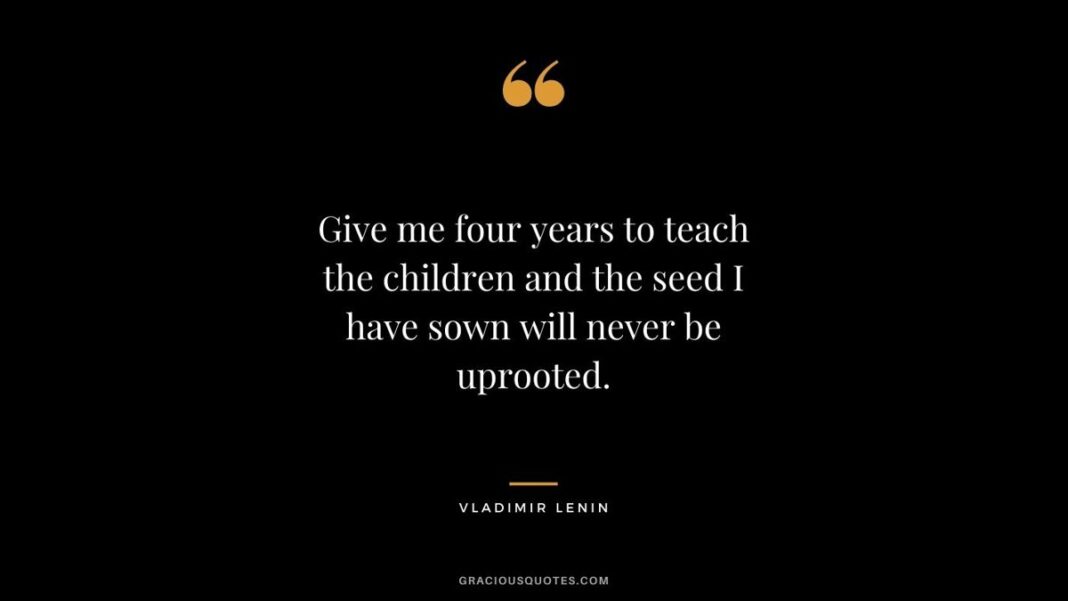 “Give me four years to teach the children and the seed I have sown will never be uprooted.” ~ Vladimir Lenin

Little did Lenin know that a radical Progressive intellectual, John Dewey, also known as the father of Progressive Education, would carry the poison water of indoctrination for him, right here, in the United States of America.

Dewey said, “the mature person, to put it on moral terms, has no right to withhold from the young on given occasions whatever capacity for sympathetic understanding his own experience has given him.” What a complex sentence from a radical intellectual, who by virtue of being an intellectual should make himself easily understood.  Instead, he follows the progressive rule of making complex situation out of simple ones. This way they can hide their deceitful intentions until the last minute. It is like opening the door for the destruction of the nuclear family as well as taking other avenues to divide our country.

Some teachers tell very young children that they do not have to tell their parents that they want to change their gender.  This creates doubt in the children’s young mind. Should I trust Mom and Dad or the teacher? The California Department of Education advocates books promoting gender transition to kindergarteners. This is just another poison pill by radical progressives to once and for all destroy the nuclear family. The seed is planted. Parental control is removed, and the government takes charge of the children’s indoctrination.

How about promoting real literature in the school system with authors like Jack London, William Faulkner, Herman Melville, Edgar Allan Poe, and so many other wonderful writers? These great story tellers open visions of adventure in our student’s minds with literature that is well written and helps improve students’ writing abilities. This is one more reason the school system must go back to traditional education that teaches instead of indoctrinating our kids.

Dewey also wrote, that “the educational plans and projects, seeing education in terms-of life experiences, are thereby committed to framing and adopting and intelligent theory or philosophy of experiences.” No! The teacher is there to teach writing, reading and arithmetic. The best teachers I ever had never inserted themselves in my maturing process. They were great listeners. They encouraged me to be the best I could be.  They helped me find my own way without ever saying, “I experienced something similar, and this is what I did.”

Then the 1619 Project appeared in the New York Times. Simply stated the 1619 Project reinforces the views of the radical Progressives who hate the United States of America and would like to transform it into a different kind of nation.

Nicole Hannah-Jones, the lead author, makes numerous and audacious claims, cites zero sources, footnotes, bibliography, or other scholarly footholds. She is no historian, but an angry, hateful radical who is hell-bent in destroying our Constitutional Republic. And she has powerful backing from also haters of America like the New York Times owners, journalists, and editors. In the meantime, she takes advantage of the “white” capitalist system she so abhors while laughing all the way to the bank.

The creation of the progressive state is the pet idea of radical intellectuals. Why do these folks think that they have all the answers for a better world, I will never know. What I interpret from their writings is that they are selfish people that hate their lives and want everyone to be miserable just like them.

Borkenau, Franz: The Spanish Cockpit: An Eyewitness Account of the Political and Social Conflicts of the Spanish Civil War: Ann Arbor Paperback, 1963

Dewey, John: The Child and the Curriculum and The School and Society: The University of Chicago Press, 1902 and 1900.