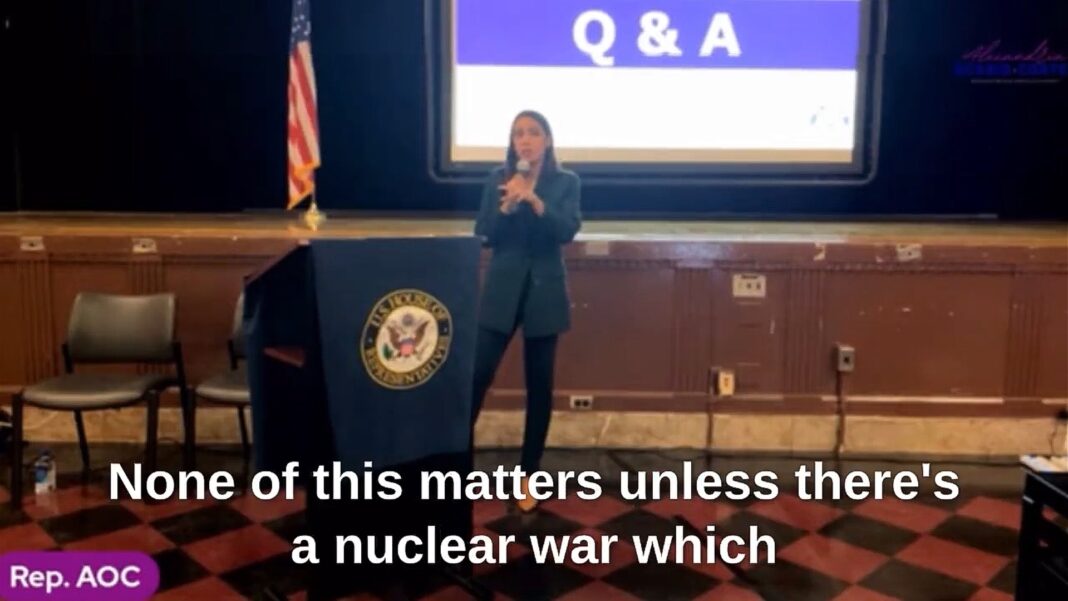 Rep. Alexandria Ocasio-Cortez (D-N.Y.) was shouted down by a pair of protesters during town hall on Oct. 12 for her endorsement of military aid to Ukraine.

“Congresswoman, none of this matters unless there’s a nuclear war, which you voted to send arms and weapons to Ukraine,” one of the protesters yelled while condemning Ocasio-Cortez for backing US arms support to Ukraine against Russia that’s raising concerns among some citizens of a third world war.

“Tulsi Gabbard, she’s left the Democratic Party because they’re war hawks,” the protesters said while Ocasio-Cortez was fielding questions about illegal immigration, the opioid crisis and the ongoing Russian invasion of Ukraine.

Gabbard drew headlines on Oct. 11 when she announced she was leaving the Democratic Party. She was a candidate for the Democrats in the 2020 presidential election after having served multiple terms in the House of Representatives.

“You originally voted—you ran as an outsider. Yet you’ve been voting to start this war in Ukraine. You’re voting to start a third nuclear war with Russia and China,” the protester said. “Why are you playing with the lives of American citizens? You’re playing with our lives?”

According to the video available on Twitter, at this point the other protester who could be identified on Twitter as activist Jose Vega said “there’ll be no neighbors if there’s a nuclear bomb!

This protester called Ocasio-Cortez a “coward” and a “progressive socialist.” “Where are you against the war mobilization?” He blamed the representative for doing “nothing” and praised Gabbard for “show[ing] guts.”

“I believed in you, and you became the very thing that you sought to fight against,” retorted Vega.

The first protester was identified by Vega as someone known on Twitter as Kynan. “My friend @Noggatone and I confronted Congress woman @AOC on her support for Nuclear War and Ukrainian Nazis,” said Vega in a message on Twitter.