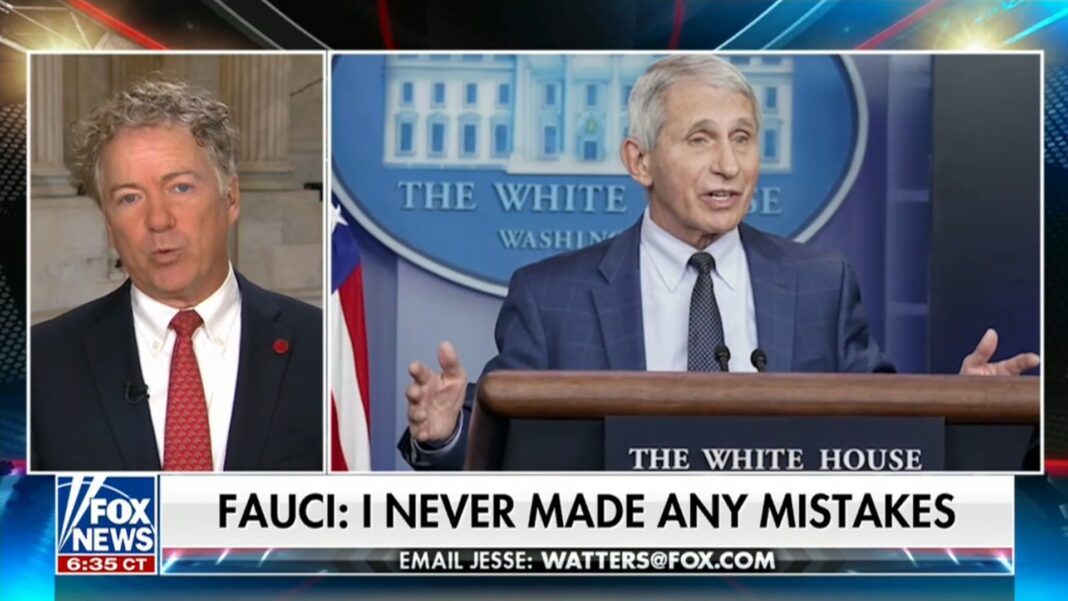 Jesse Waters: Goodbyes are always hard, but as the saying goes. don’t be sad it’s over, be glad it happened. But in his final month on the throne of science, Dr. Anthony Fauci is having a tough time saying goodbye to the cameras. We keep thinking Fauci has done his farewell interview but then he does another, and another, and another. The science tells us it is actually more dangerous to get between Fauci and a camera than it is to catch COVID. Today he stopped by The Washington Post where he left them with one last departing message . . .

Dr. Anthony Fauci: Well, you’re right there is a dichotomy. I think if you do the numbers, with all due respect to the people who hate me, I think you’re outnumbered by the people who feel differently than you do.

Jesse Waters: Fauci’s reading his own press clippings. I’ve seeing my poll numbers, they’re pretty good. He wants you to remember him as a hero even though he was wrong on the travel ban, masks, lockdowns, school closures, warp speed, vaccine effectiveness, vaccine mandates, and the lab leak. But Fauci could never admit he was wrong. Fauci was always the victim.

Dr. Anthony Fauci: Ideologies were spilling over into an agenda or discussion of what should have been purely public health issues. . . . and being the person who’s very visible in that regard, I became the target. The enemy is the virus, it’s not each other. And if you look around at some of the things that have gone on in our country, it appears that we are more enemies of each other than we are of the virus.

Jesse Waters: Ah, philosopher Fauci, where do you get this deep knowledge? No hero should ever be the target, but every hero should always admint they’re not perfect, which Dr. Fauci had a tough time doing.

Reporter: Is there a moment of your career that you wish you could do over?

Dr. Anthony Fauci: You know um, Jasmine, no, and I know they’re going to be, people are going to respond to that, um, who say well what does he think, he’s perfect? Absolutely not. I’m the first to admit I’m far from perfect, but when you say do over. You know I really can’t see something that I would do completely over.

Jesse Waters: Senator Rand Paul joins us now. Don’t you love it when someone asked you what you’ve done wrong in your life and you pause for about 40 seconds and scratch your chin.

Senator Rand Paul: Let me count the ways. Likely there is no public figure, or public health figure, that has made a greater error in judgment than Dr. Fauci. The error in judgment was to fund gain-a-function research in a totalitarian country. Fund research that allowed them to create super viruses that, in all likelihood, accidentally leaked into the public and caused 7 million people to die. Think about it. This is right up there with decisions, some of them malevolent or military, to kill millions of people. This accidental, but it goes to judgment. Talk about errors. You think he might apologize to the world for funding research that allowed super viruses to be created in a lab that was not properly outfitted for safety, that people were already reporting was dangerous. To support that that type of research and then to look the other way and say nothing to see here and to cover it up, for the last two years he’s been covering his tracks. But we’ve caught him red-handed and he won’t get away. Historically he will be remembered for one of the worst judgments in the history of modern medicine.

Jesse Waters: Criminally this would probably fall under involuntary manslaughter, but we’re not in a criminal court so, I guess it’s just politics. 6 million people can die worldwide and it’s oops I was probably right, no one asked me any questions.

You’re going to be asking some tough questions in the next couple days. You’re playing a game of chicken, I’m hearing, the defense department is not getting funded unless they hire back unvaxxed military men and women? How do you think that’s going to play out?

Senator Rand Paul: You know our young men and women who volunteer, we have an all-volunteer army, to defend our country, to put their lives on the line they deserve to have their religious freedom as well as their medical choices and freedom to decide what goes into their body. We know this and this is a scientific fact. The vaccine does not prevent you from getting an infection. It doesn’t prevent you from transmitting an infection. And for young people, there isn’t significant evidence to show that it reduces the severity or the hospitalization. The military’s become so woke and they’re they’re demanding you got a vaccine that you don’t need. So, something’s got to change.

Jesse Waters: I, hopefully that changes things, and we’ll be following how that plays out. Senator Rand Paul of Kentucky, thanks so much.