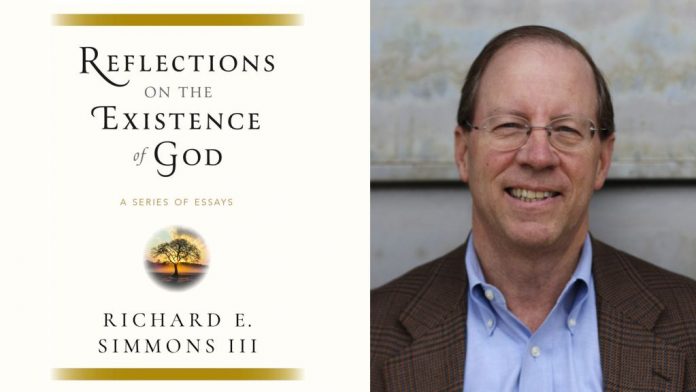 “Richard Simmons’ book, Reflections on the Existence of God, is the fruit of many years of thoughtful reading about the relationship of theology to the issues of modern life. He brings the biblical doctrine of God into conversation with the most basic questions about meaning and morality, science and human reason. Chapter after chapter offer helpful insights.” — Tim Keller, Redeemer City to City

This book is a series of short essays seeking to answer life’s most enduring question: Does God exist? Richard Simmons has attempted to craft a book that is well researched but also easy to read and understand. Each essay can be read in less than 10 minutes.

In the end it is important to know whether God exists or He does not exist. There is no third option. Which of these beliefs is true and which one is not? –Richard E. Simmons III

“I have taught apologetics for many years. Of all the books on apologetics, Richard E Simmons’ book is the best I have ever read.”
— Wallace Henley, former White House Aide, The Christian Post columnist, author of God & Churchill

As you read through these essays, I would remind you that atheism and theism are alternative belief systems that offer radically different views. They are not just two separate views of life; they are opposing mutually exclusive views, delivering opposite conclusions about the meaning of life and our existence as human beings.

A person who is seriously searching for an answer to the question of God’s existence must take time to understand fully the logical conclusions derived from both theism and atheism. Ultimately, the belief which is true will be consistent with the real world and the one which is untrue will present a view of life that is not in harmony with reality.

In the end it is important to know whether God exists or He does not exist. There is no third option. What I am seeking to do in this book is to determine which of these beliefs is true and which one is not.

“The best atheists agree with the best defenders of faith (in God) on one crucial point: that choice to believe or disbelieve is existentially the most important choice of all. It shapes one’s whole understanding of human life and purpose, because it is a choice that each must make for him or herself.” –Adam Kirsch

“Wherever we reach, from the smallest particle to the largest galaxy, from the alpha to the omega, in the room where we are reading these very words to the great natural world outside, we will find, if we seek, the fingerprints of an intelligent designer. Generations of brilliant men and women from the dawn of time have been led on this quest by the intimations of God in the details. The deep mysteries of life, of emotions, of love and death – all, perhaps, can be studied and broken down into smaller and smaller components by the scientific method, but in the process, the inklings of a creative force should always surprise us with awe and wonder.” –Richard E. Simmons III

Richard E. Simmons III is the founding director of The Center for Executive Leadership, a faith-based ministry he started in 2001 in Birmingham, Alabama, focused on counseling businessmen and professionals. Richard is a best-selling author of The True Measure of a Man. His approach is structured and methodical, and his passion is transforming lives through gaining wisdom and applying truth to every area of life. His newest book, Reflections on the Existence of God, seeks to answer life’s enduring question – Does God exist? Richard was born and raised in Birmingham, Alabama, and educated at Sewanee, The University of the South. He worked in the insurance industry for 28 years before starting The Center. When he s not spending time with his family, he enjoys teaching, counseling, writing, or speaking to men s groups across the country.