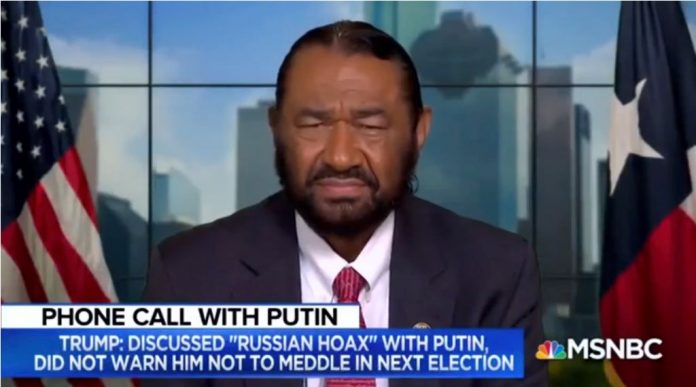 Democrat Representative Al Green stated in an interview with MSNBC on May 4, 2019, “I’m concerned if we don’t impeach this President, he will get re-elected”.

PRESIDENT TRUMP, 16 JULY 2018: I have President Putin, he just said it’s not Russia. I will say this, I don’t see any reason why it would be. I have great confidence in my intelligence people, but I will tell you that President Putin is extremely strong and powerful in his denial today.

MSNBC HOST: Congressman, how do you interpret President Trump not telling Vladimir Putin to stay out of our next election?

REP. AL GREEN: I see this as unconscionable, it’s inconceivable. One can only imagine what it does to the esprit de corps of the persons who work in our intelligence agencies. They have said the Russians interfered. Mr. Mueller has said the Russians interfered. The president has not, and he talks about a great relationship between Mr. Putin and Russia. He may have a great relationship but the American people do not. It’s the American people we have to put above the American president. It’s unfortunate he would make such a statement.

MSNBC HOST: You have been calling for starting articles of impeachment since 2017, but a new Quinnipiac poll taken after the release of the redacted Mueller report said 66% say Congress should not start impeachment proceedings, there’s a sharp partisan divide, with only 4% of Republicans favoring impeachment. Are you afraid this talk will help the president’s re-election?

I regret I’m the canary in the coal mine. I regret I was the person who had to first say there’s some obstruction taking place here. I regret it had to be me but it had to be somebody. I take my duties seriously. I love my country and want you to know this, we must impeach this president. If we don’t, it’s not the soul of the nation that will be at risk only, it is the soul of the Congress that’s at risk. Congress has a duty, a responsibility, an obligation that only it can fulfill. No one else can no. Other entity can. It is Congress that will have to act. If we put people above party, we’ll act properly. But if we allow a party to be above principle, we will not. If we allow political expediency to trump moral imperative, we will have created a shameful situation that this Congress will never live down. History won’t be kind to us. We must impeach him.

MSNBC HOST: I do understand you believe you are duty bound but strategically speaking here, are you okay with the president going through impeachment proceedings and then at the very end in the Republican-controlled Senate where he needs to be convicted, headlines all over the country saying “Trump acquitted” right in the middle of the presidential election campaign?

REP. AL GREEN: Dr. King said — and I agree completely — the time is always right to do right. The right thing for the Congress to do is impeach. Let the Senate do what they may. We have to do what they must.

This is not a game. This is not about who’s going to do well in the polls. The polls will catch up with justice when we show people that we have the backbone, the spine to do what this constitution demands of us when we have an unfit, reckless, ruthless, lawless president in the White House. We say that. We talk about it. You will hear Democrats talking about how he’s unfit to be president, how he is doing things that are unconscionable and unconstitutional.

The question is this, will we go beyond these things being talking points and make them an action item? Will we take them to the floor of the one place in the world where the president can be brought to the bar of justice — that’s the House of Representatives. That’s our moral duty to do so. Moral imperative has to trump political expediency. This notion that if it goes to the Senate, it will not be politically expedient to have it happen, my dear brother, that will cause this country to lose Article Two Section Four of the Constitution which deals with impeachment. The framers knew there would be a time such as this, and a president such as Trump, and if anybody cares to read Federalist 65, you will find the words of Hamilton, you will find the words of Madison and John Jay where they explain why we at a time such as this have to deal with the president such as Trump with impeachment.