The GOP has won 218 seats needed to gain control of the House of Representatives after winning key races in the midterm elections.

Republicans held onto a number of swing districts and notched surprising victories in others, flipping seats in states like Arizona, New York, and Oregon.

“Republicans have officially flipped the People’s House! Americans are ready for a new direction, and House Republicans are ready to deliver,” Rep. Kevin McCarthy (R-Calif.), the House minority leader, said in a statement.

Protracted vote counting, primarily in western states, delayed knowing which party would win control of the lower chamber beginning in January 2023, when representatives-elect will be sworn in.

The 218th seat was called on Nov. 16. Rep. Mike Garcia (R-Calif.) won reelection, defeating Democrat Christy Smith in the race for California’s 27th Congressional District. After the latest update, Garcia was ahead with 54.2 percent of the vote.

“It is the honor of my lifetime to continue to serve #CA27 in Congress. I ran to fight for California families and protect the American Dream, and I look forward to working hard every day to continue that mission,” Garcia, 46, said in a statement.

Smith, 53, a California assemblywoman, had acknowledged earlier in the week that Garcia would likely come out on top.

Democrats have secured 210 seats in the next Congress as of Wednesday night. The latest call was for Rep. Jared Golden (D-Maine).

Democrats have controlled the House since 2019, when they flipped dozens of seats in a blue wave during former President Donald Trump’s term in office. Democrats held a 222–212 majority in 2021. That hold is currently 220–212 due to several vacancies.

Midterms are generally seen as a referendum on the party in power, especially if that party controls at least one chamber in addition to the presidency. Democrats have held both chambers and the presidency for the past two years, and will retain control of the Senate in the new Congress after a stronger-than-expected performance in the midterms. 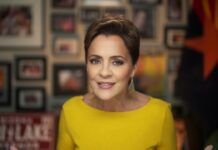