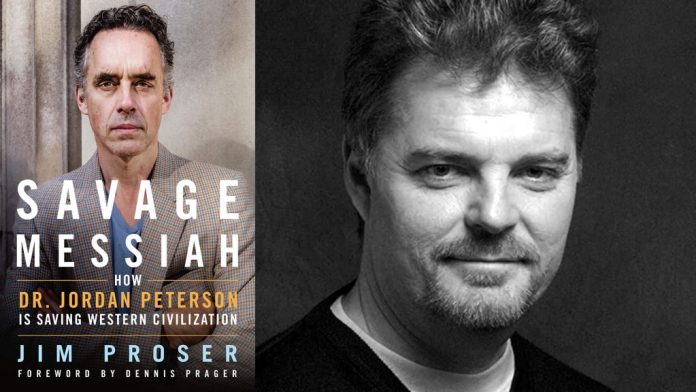 A fascinating biography and in-depth look at the work of bestselling writer and psychologist Dr. Jordan Peterson, by award-winning author Jim Proser.

Who is psychologist, professor, bestselling author, and YouTube personality Dr. Peterson? What does he believe in? Who are his followers? And why is he so controversial? These are among the many questions raised in this compelling, exhaustively researched account of his life—from Peterson’s early days as a religious-school student in small-town Canada to his tenure at Harvard to his headline-making persona of the present day.

In Savage Messiah, we meet an adolescent Peterson who, scoffing at the “fairy tales” being taught in his confirmation class, asks his minister how it’s possible to believe the Bible in light of modern scientific theory. Unsatisfied with the answer he’s been given, Peterson goes on to challenge other authority figures who stood in his way as he dared to define the world in his own terms. This won Peterson many enemies and more admirers than he could have dreamed of, particularly during the digital era, when his nontraditional views could be widely shared and critically discussed. Still, a fall from grace was never far behind.

Peterson had always preached the importance of free speech, which he believed was essential to finding life-saving personal meaning in our frequently nihilistic world. But when he dismissed Canadian parliament Bill C-16, one that compelled the use of newly-invented pronouns to address new gender identities, Peterson found himself facing a whole new world. Students targeted him as a gender bigot. Conservatives called him their hero. Soon Peterson was fixed firmly at the center of the culture wars—and there was no turning back.

With exclusive interviews of Dr. Peterson, as well as conversations with his family, friends, and associates, this book reveals the heart and mind, teachings and practices, of one of the most provocative voices of our time.

JIM PROSER’S first book, I’m Staying with My Boys: The Heroic Life of Sgt. John Basilone, USMC was awarded the United States Marine Corps Commandant’s Recommendation in 2011, and was referenced as source material for the HBO television series “The Pacific.” Proser’s No Better Friend, No Worse Enemy: The Life of General James Mattis has been nominated for the Marine Corps Heritage Foundation’s 2019 Col Joseph Alexander Award. Proser lives in Sarasota, Florida.

Jim began his professional writing career at age 15 as a city reporter for the Lambertville (NJ) Beacon newspaper and went on as a journalist to write for the Bucks County Courier Times, Investor’s Business Daily and National Review Online. He has written screenplays for film and television producers including 20th Century Fox Television, Showtime Networks and numerous independent producers.

His first book, “Mr. Copacabana; An American History by Night” has begun filming as a multi-hour television documentary series, is in negotiations as an extended dramatic television series and is the inspiration for an authentic re-creation of the original Copacabana nightclub in Tampa, Florida. The book reveals the outrageous life story of Jim’s father, Monte Proser, creator and operator of the iconic nightclub, and his involuntary business partnership with Frank Costello, the infamous “Prime Minister” of the mafia.

His second book, “I’m Staying with My Boys; The Heroic Life of Sgt. John Basilone, USMC” was published by St. Martin’s Press and awarded the United States Marine Corps Commandant’s Recommendation in 2011. It was the source material for the subsequent documentary film written and directed by Mr. Proser. The book and documentary have also served as the source material for speaking engagements to the United States Naval Institute in Washington DC, the University of Northern Idaho Writer’s Symposium, Bowdoin College Advanced Literature Studies, the Coeur D’Alene Charter Academy and numberous civic organizations and secondary schools.

His third book, “No Better Friend, No Worse Enemy; The Life of General James Mattis” was published by HarperCollins publishers and released on August 7, 2018. The book has achieved the rank of #1 in its category and #17 overall on amazon.com. He has been interviewed about the book on “The Story with Martha MacCallum” and “Fox and Friends” on the Fox News Network.

Jim lives in Sarasota, FL and spends his days working on his next book and writing inflammatory political posts for his blog at jimproser.com.