Home Previews Books Scanned: Why Vaccine Passports and Digital IDs Will Mean the End of... 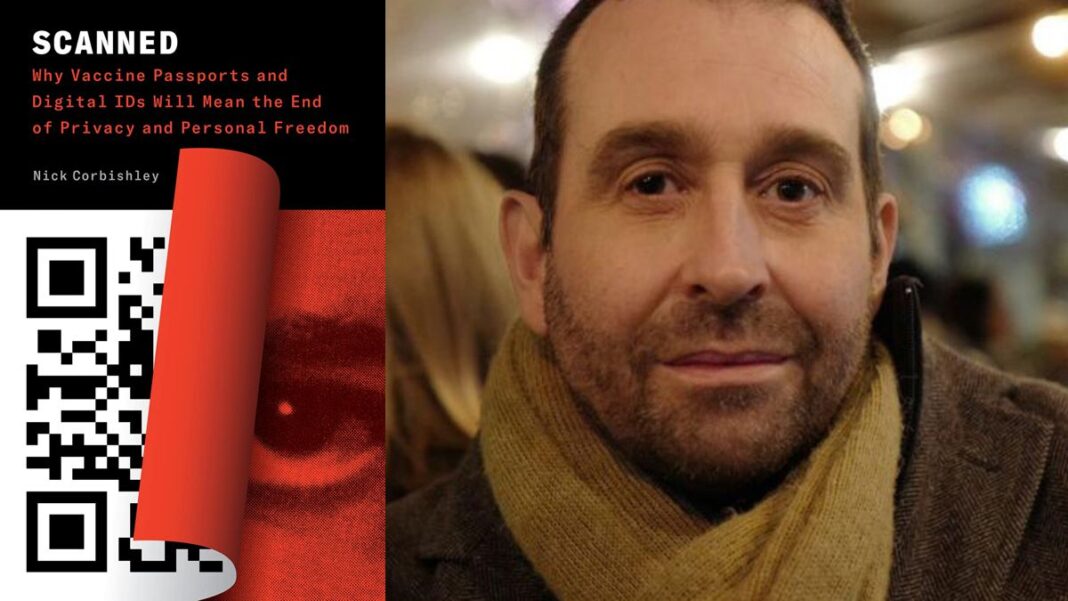 Imagine being physically denied access to your office, business, or livelihood. Imagine being refused entry to a grocery store or being told who you can or cannot sit with at a restaurant. Imagine being barred from a hospital room when you or your family member needs critical care.

Unthinkable? Today, these scenarios and worse are happening in “democracies” all over the world, and could be our collective future―orchestrated by AI, Big Tech, and state-sponsored apps―all in the name of “protecting” public health with vaccine passports.

The stakes could not be higher. If you do not have a vaccine passport, you will be prevented from accessing basic services, from earning a living or traveling within your own country. Even if you do have one, you will be exposed to unprecedented levels of government and corporate surveillance, data mining, and behavioral control.

In Scanned, investigative journalist Nick Corbishley examines and exposes the lies and overreach that underpin the wholesale erosion of personal freedoms that is happening at an alarming rate. In clear language supported by rigorous research, Corbishley uncovers how the rollout of vaccine passports not only represents an unprecedented violation of privacy and bodily autonomy, but how it perpetuates the idea that a “small” collective sacrifice will allow us to return to normality.

If things continue on the current path, Corbishley makes clear, getting back to “normal” is never happening. Put simply, instead of a return to normality, we will see the creation of a starkly different form of existence in which most of us will have virtually no agency over our own lives.

Few people want to be seen as outliers, especially if it means feeling responsible or being blamed for the suffering and deaths of others.

“Nick Corbishley exposes the intricate web spun by global predators using the principles of mass formation psychosis in order to drive an agenda of worldwide injection of biologically active substances. People entranced in fear and confusion feel their entire existence depends on periodic receipt of grossly unsafe and ineffective products―all to live the day-by-day existence they had grown to expect. Corbishley unwinds this madness into an understandable framework with chilling insights about the loss of medical freedom that is inextricably linked to loss of social and economic freedoms. This book is an emergency read.”―Peter A. McCullough, MD, MPH; chief medical advisor, Truth for Health Foundation

“Scanned by Nick Corbishley is essential reading; this book explains in an incontrovertible way how ‘vaccine passports’ have already closed off basic human liberties in many parts of the formerly free world, and shines a light on the mounting layers of dystopia and control for which they form the foundation. No one should risk missing the information in this book.”―Naomi Wolf, New York Times best-selling author of The End of America and Outrages

“‘Show me your papers’ is a phrase that should send chills down the spine of any thinking person. The idea that we would bar free citizens from access to public life because they have chosen to say, ‘No, thank you’ to a pharmaceutical intervention for religious, medical, or philosophical reasons is breathtakingly wrong. Nick Corbishley’s outstanding new book, Scanned, explains why. Anyone who cares about public health and personal freedom needs this book.”―Jennifer Margulis, PhD, award-winning science journalist and best-selling author

“The rollout of ‘vaccine passports’ and the broader pseudo-medical social-segregation system they are part of is among the most sinister and alarming threats we have faced in our lifetimes. Under the pretense of ‘keeping us safe and healthy,’ governments, supranational governing entities, and tech corporations have colluded to impose unprecedented restrictions and surveillance on people all around the world. Scanned unpacks the logical insanity of the official ‘vaccine passport’ narrative and describes how mass COVID hysteria has been instrumentalized to consolidate not only wealth and power, but biometric control over ordinary citizens.”―C. J. Hopkins, award-winning playwright, novelist, and political satirist

Nick Corbishley is a writer, journalist, teacher, and translator based in Barcelona. Formerly a senior contributing editor at the San Francisco–based economics and finance news site Wolf Street, he is currently a regular contributor to the US financial news and analysis blog Naked Capitalism, where he writes about financial, economic, and political trends and developments in Europe and Latin America. He also worked for many years at a well-respected business and economics journal in Spain. Nick is an occasional speaker (in English or Spanish) on economic, political, and geopolitical topics. Nick holds a BA in history from Sheffield University, speaks three languages (English, French, and Spanish) and is a regular visitor to his beloved country-in-law, Mexico.