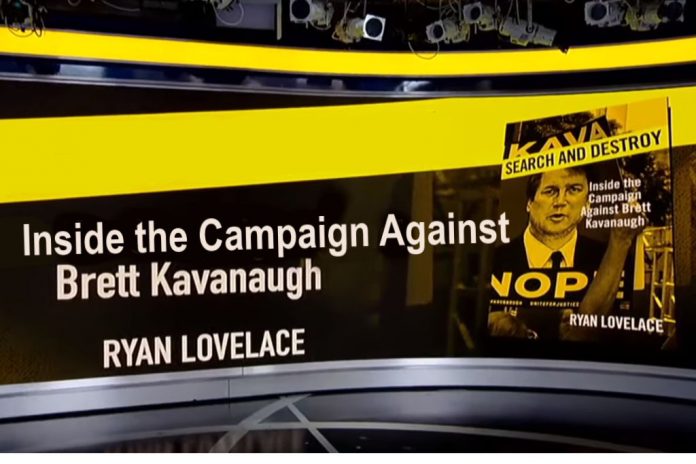 “You have replaced ‘advice and consent’ with ‘search and destroy.’” —BRETT KAVANAUGH

In this deeply researched account, one of Washington’s top legal reporters reveals the massive funding, sophisticated organization, and fanatical zeal behind the campaign to stop Brett Kavanaugh’s appointment to the nation’s highest court.

Trump had promised to nominate only Scalia-style “originalists” to the Court—a promise he backed up with a list of potential nominees. The left took him at his word, setting up a titanic political clash when Justice Anthony Kennedy—the decisive vote on abortion—announced his retirement in June 2018.

The nomination of Judge Brett Kavanaugh—until that moment universally respected—sent Democratic senators racing to the cameras to announce their opposition, while an armada of activist groups, fueled by “dark money,” launched a coordinated public relations assault of unprecedented scope and fury.

Kavanaugh was nevertheless on the brink of confirmation when the Democrats, in desperation, disclosed an allegation of teenaged sexual assault against the stunned nominee, turning Christine Blasey Ford into a #MeToo icon.

Ryan Lovelace reports how Kavanaugh’s opponents, unable to produce a shred of corroboration, resorted to the court of public opinion, where the rules of evidence and standards of fairness favor the prosecution.

Under the skillful direction of a Clinton henchman and a savvy lawyer, they conducted a show trial in which the compliant media arrived at the desired verdict.

Kavanaugh owed his eventual confirmation to the pro-choice Republican senator Susan Collins, whose vote rejected her steel spine and commitment to fairness—“the allegations fail to meet the more-likely-than- not standard”—as well as her conclusion that Roe v. Wade was safe with him on the Court.

Lovelace concludes with a thought-provoking assessment of the unexpected consequences of the Kavanaugh controversy and of the cost to the judicial system of a search-and-destroy confirmation process.

Ryan Lovelace covers legal news in Washington as the D.C. Business of Law Reporter at The National Law Journal, American Lawyer, and ALM Media. He previously worked as the Washington Examiner’s Supreme Court Reporter and has covered national political news as a Robert Novak Journalism Fellow at The Fund for American Studies, as a William F. Buckley Jr. Fellow in Political Journalism at National Review, and as a Student Free Press Association Fellow at The Weekly Standard. He is an Investigative Reporters and Editors award-winner.