If people do not speak up when faced with a vocal minority trying to impose their radical views on society, the silent majority and their children will face dire consequences, said rapper and social commentator Zuby, encouraging the “silent majority” to stop censoring themselves.

“A silent majority may as well not exist,” he said. “I think there’s a silenced majority.”

As long as people stay silenced, then that vocal minority—even if it makes up only 1 percent of the population—will not be afraid to state their opinions, he said, because they are very vocal and bold.

People like talking about a “silent majority” because it makes them think that somehow by magic, things are going to turn around for the better, Zuby said in a recent interview for EpochTV’s “Crossroads” program.

In a debate, if one person is “spouting off the goofiest, most ludicrous ideas” and the other person just sits there silently and nods, then the one who talks will win the debate, he said.

“Most Americans aren’t on board with the most extreme and radical and bizarre notions that are floating around out there,” he said, referring to the recent assertions that men can become pregnant or give birth. “Over 90 percent of people don’t believe that, but those people need to be willing to say something.”

A silent majority is weak when faced with a vocal minority, he added.

Then people wonder why the world has gone crazy, Zuby said, and his answer is that “it’s happened because most people have let it happen.”

“Most people are not being censored by the government or even censored by big tech or censored by social media,” Zuby said. “They’re censoring themselves.” 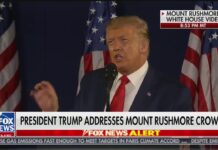