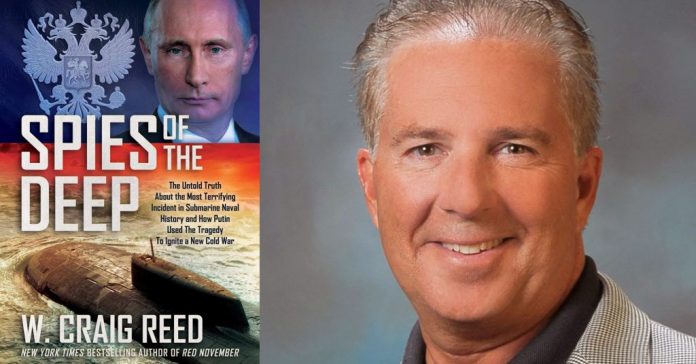 Twenty years after the most terrifying submarine disaster in naval history, the untold story about why the Russians buried the truth and how Vladimir Putin used the incident to ignite a new Cold War finally comes to light.

A decade after the Cold War and just a few months after Vladimir Putin came to power, a violent explosion sent the Russian submarine Kursk to the bottom of the Barents Sea. The Russians claimed an outdated torpedo caused the incident and refused help from the West while twenty-three survivors died before they could be rescued. When Russian naval officers revealed evidence of a collision with a U.S. spy sub, Putin squelched the allegations and fired the officers. In Spies of the Deep, the New York Times bestselling author of Red November shatters the lies told by both Russian and U.S. officials and exposes several shocking truths. Included are never-before-revealed facts and firsthand accounts from deep sea rescue divers, U.S. submariners, government officials, Russian naval officers, and expert witnesses. Not to mention unveiled evidence of a secret deal between Putin and U.S. President Bill Clinton to avert a nuclear war. Discover how the Kursk propelled Putin to power and how he used its demise to muzzle oligarchs, wrest control of energy firms, rebuild Russia’s military, and dominate Arctic resources and sea routes.

Spies of the Deep explores how the Kursk incident will be remembered as a pivotal historical event that propelled the world’s superpowers into another, far more dangerous Cold War, sparked conflicts in the Arctic, and fueled a resource war that could create an economic nightmare not seen since the Great Depression. Are U.S. and NATO navies already too far behind to deal with new threats from Russia, China, North Korea, and Iran, and if so, how might that impact each of us?

“W. Craig Reed’s Spies of the Deep is a chilling—downright terrifying—dive into the current global crisis. It looks at where we’ve been as a world power and the dagger’s edge upon which we’re all balanced. The book shines a light into the dark machinations of politicians and the military—both here and in Russia and China—and how clandestine operations are ratcheting up tensions to the point of global economic collapse, even nuclear war. If you want to understand the threat at our very doorstep, pick up this book and prepare to be shocked and enlightened.” ~ James Rollins, #1 New York Times Bestselling Author of “Crucible”

“W. Craig Reed’s Spies of the Deep is even more engaging than his award-winning Red November. Reed is a former U.S. Navy submariner and diver, so all of his books are well-researched, accurate, and read like bestselling Tom Clancy thrillers. I thoroughly enjoyed it!”
~ Andrew Peterson, Bestselling Author of “Hired to Kill”

W. Craig Reed is the New York Times bestselling author of the award-winning Red November, The 7 Secrets of Neuron-Leadership, and Tarzan, My Father, co-written with the late Johnny Weissmuller, Jr. Reed served as a U.S. Navy submariner and diver during the Cold War and earned commendations for completing secret missions, some in concert with SEAL Team One. Reed’s military experience and inside contacts help infuse his writing with intrigue and realism and inspired his latest novel, STATUS-6. Reed holds an MBA in Marketing and is the cofounder of Us4Warriors, an award-winning Veterans Non-Profit. Reed serves on the Board of Aretanium, an employee productivity firm that leverages the neuroscience research in the The 7 Secrets of Neuron Leadership.

William Craig Reed is the author of the non-fiction books The 7 Secrets of Neuron Leadership with a Foreword by Gordon England–former Deputy Secretary of Defense and interviews with a former NASA Administrator (CEO), Secretary of the Navy, Admirals, Generals, CEOs, top neuroscientists, Navy SEAL officers, and more (Wiley & Sons, 2017). Also, Cold War III (Veterans Publishing, 2015) and Red November: Inside the Secret U.S. – Soviet Submarine War (HarperCollins, 2010). Reed also wrote the novel The Eagle and the Snake: A SEAL Team Six Interactive Thriller (Diversion Publishing, 2012). Reed is the co-author of Tarzan, My Father with the late Johnny Weissmuller, Jr. (ECW Press, 2002). Reed served as a U.S. Navy diver, submarine weapons technician, and espionage photographer for special operations aboard nuclear fast-attack submarines. He earned commendations for completing secret missions during the Cold War, several in concert with Navy SEAL teams. Reed is an alumnus or member of numerous military, veteran, and technology associations that allows him to reach an audience of millions.

When not writing, Reed is a neuroscience expert and has provided executive sales, marketing, and leadership consulting and coaching services for some of the world’s largest firms. He holds an MBA in Marketing and was a former vice president and board director for the Silicon Valley American Marketing Association. He founded two software companies and developed a patent-pending technology that automatically customizes marketing content based on a prospect’s neuroscience-based profile.