Home Previews Books Stealing Your Vote: The Inside Story of the 2020 Election and What... 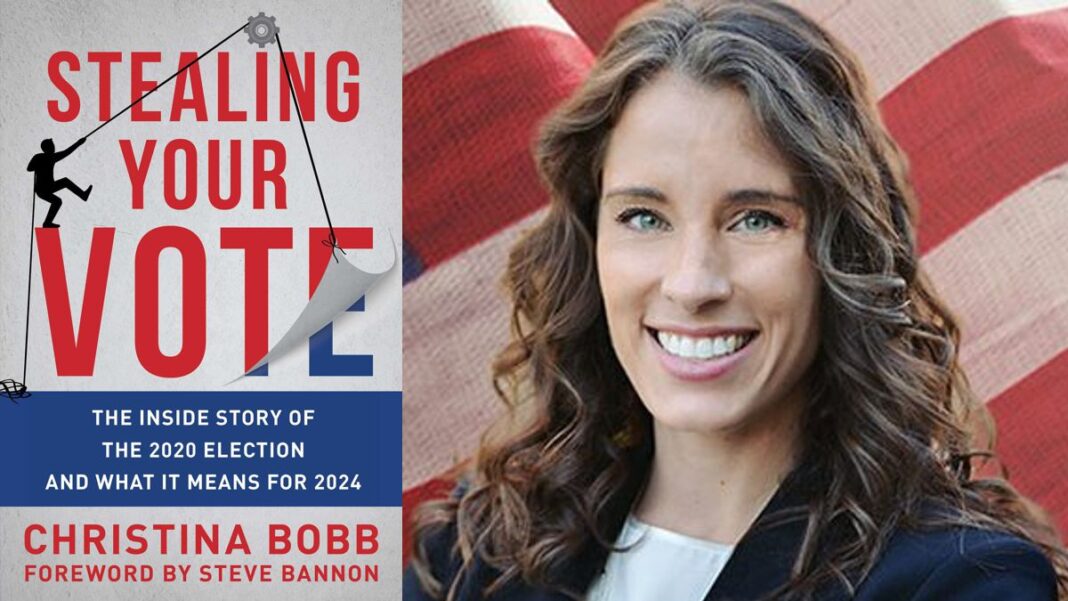 How Election Fraud Is Rampant, and How to Stop It before It Kills America

The mainstream media has labeled it “The Big Lie,” but the facts on the ground tell a very different story. While politicians on both sides of the aisle scramble to stifle all investigations into election fraud, and the mainstream media pumps out “nothing to see here” stories, investigative reporter Christina Bobb reveals the ugly truth: the 2020 election was riddled with lying, cheating, stealing, and vote dumping which disenfranchised millions of Americans and probably swayed the outcome of the election. As usual, the cover-up was even worse than the crime, as politicians, media and activists launched an all-out assault on facts and evidence, doing everything in their power to bury the truth and slander anyone who dared ask the inconvenient questions.

Stealing Your Vote tells the story of corruption within the Democratic Party—but also reveals the cowardice throughout the Republican Party, as fat and happy politicians from both parties desperately worked to protect the status quo. Bobb also tells the story of a handful of brave patriots who tried, and continue trying, to find out just what happened in 2020.

As we look forward to 2024, we face an unprecedented crisis: millions of Americans have now lost faith in the integrity of our elections. The country has become ever-more polarized, pitting those who believe the election was stolen versus those who are determined to cancel both the investigations and the doubters. But election integrity should not be a partisan issue. Fair and honest elections are the bedrock of our republic—while tainted elections are the hallmark of tyranny. If we fail to regain election integrity and the trust of the American people, all of us, Democrat and Republican, liberal and conservative, are doomed to a dark future.

Christina Bobb’s Stealing Your Vote is the first and only investigative report into what truly happened in the 2020 elections and the cover-up that followed, and what we must do now as our next presidential election approaches.

“Christina Bobb has tirelessly pursued the truth about the 2020 election. She examined an obviously problematic election with an eye for the truth and getting to the bottom of political corruption in America. Stealing Your Vote highlights the problems that both Democrats and Republicans face—they’re too biased to check their own work. If you want an honest look at the 2020 election and the corruption that obscures it, Stealing Your Vote is a must read.”
—Rudy Giuliani, former Mayor of New York City

“I got to know Christina Bobb through her post-2020 election investigation. We worked collaboratively to identify key issues with the 2020 election to ensure that these shortcomings wouldn’t happen again. Stealing Your Vote is a great resource for anyone wanting to understand what happened in 2020, and why many elected officials did nothing about it. Christina expertly captures the heart of the problem—that political status quo and mediocrity have led to a crisis in our election processes.”
—Doug Mastriano,Pennsylvania State Senator

“I first met Christina Bobb when she was researching the 2020 election, and we have since become good friends. Like me, she is passionate about cleaning out corruption and ensuring that it’s the American people who elect their leaders. Stealing Your Vote gives the reader a unique perspective on the challenges, and solutions, facing this nation as we grapple with ensuring clean elections. America is on the verge of its greatest season yet, and Stealing Your Vote will show you how we get there.”
—Janel Brandtjen, Wisconsin State Representative

“An expert knows that you can best determine a solution by going onsite and talking to those who really know what’s going on. Christina Bobb did just that and she shares her unique observations from her discussions with experts across the country in Stealing Your Vote. I had the privilege to compare notes with Christina Bobb as we each reported on the glaring problems facing our elections. Stealing Your Vote pulls back the curtain to show the reader why America’s politicians have been slow to act, and how our elections have become so compromised. Elected officials need to be held accountable for their actions, and Stealing Your Vote helps the reader understand major conflicts of interest in every level of government.”
—Joe Hoft, The Gateway Pundit

“Christina Bobb is one of the most analytical, tenacious, and capable investigative reporters I’ve had the pleasure to work with. Her legal expertise, combined with her experience working for the Department of Homeland Security, made her one of the most informed investigative reporters researching the 2020 election. She routinely broke news on the irregularities and worked closely with leaders at the state level to provide answers to the American public. Stealing Your Vote gives the reader behind the scenes access to see what really happened during the 2020 election.”
—Robert Herring, Owner and CEO of One America News

Christina Bobb is an investigative reporter and attorney who has spent most of the past two years traveling the country to explore and report on the growing mountain of evidence of election fraud and mismanagement.

Christina was a television show host and correspondent with One America News Network from 2020 to 2022. In the wake of the 2020 election, she reported almost exclusively on election integrity. Christina’s efforts covering the 2020 election, and highlighting the irregularities, have been so successful that other news networks are reporting on her—including the Washington Post, New York Times, CNN, Buzzfeed, The Daily Beast, Business Insider, Arizona Republic, and the Arizona Mirror, among others. In addition to raising funds for the forensic investigations, Christina has helped advise state leaders on how to initiate investigations in their own states.

Christina began her legal career in the United States Marine Corps, serving as a defense counsel representing marines and sailors in court-martial and administrative separation hearings. She has also served in multiple overseas tours including Helmand Province, Afghanistan, and Stuttgart, Germany. After her military service, Ms. Bobb transitioned to private practice at Higgs, Fletcher, & Mack LLP in San Diego, representing clients in all stages of trial, negotiation, mediation, and arbitration. She eventually moved to Washington, DC, where she held executive level positions within the Department of Homeland Security.

Born in Michigan and raised in Arizona, Christina holds a BA from Arizona State University, an MBA from San Diego State University, a JD from California Western School of Law, and an LLM in National Security Law from Georgetown University Law Center.

Christina currently serves as attorney for President Donald J. Trump, working closely with him to further the America First agenda. Most notably, she was his legal representative onsite during the unprecedented raid by the FBI on Mar-a-Lago.