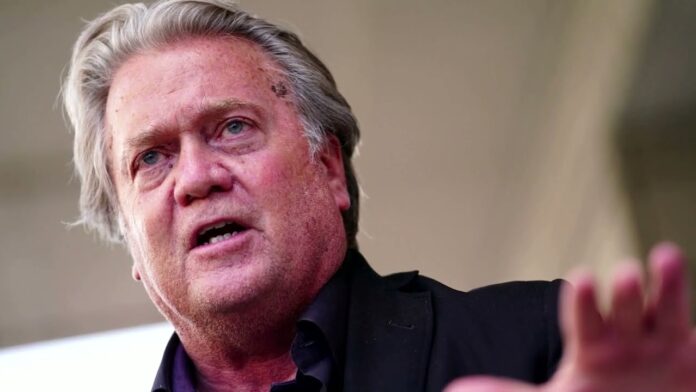 Steve Bannon on Sept. 8 surrendered to authorities in New York over fresh charges related to his involvement with a scheme to build border barriers on private land.

Bannon, an ex-adviser to former President Donald Trump, entered the office of Manhattan District Attorney Alvin Bragg at about 9:30 a.m.

An indictment filed in New York Supreme Court says Bannon laundered money and committed a conspiracy to defraud donors through the “We Build the Wall” crowdfunding campaign, which saw a group raise funds they said would go toward building barriers along the U.S.–Mexico border.

Bannon and others “solicited donations and raised money from donors throughout the United States, including several hundred from New York County, based on the false representation that none of the money donated to WeBuildTheWall, Inc. would be used to pay Unindicted Co-Conspirator 1’s salary,” the document states.

The defendant faces up to 34 years in jail if convicted.

“There cannot be one set of rules for everyday people and another for the wealthy and powerful—we all must play by the same rules and must obey the law,” New York Attorney General Letitia James, a Democrat who is helping to prosecute Bannon, told The Epoch Times in an emailed statement.

“Mr. Bannon took advantage of his donors’ political views to secure millions of dollars which he then misappropriated. Mr. Bannon lied to his donors to enrich himself and his friends. We will continue to take on fraudulent behavior in every corner of society, including white collar criminals, because no one is above the law.”

Bannon said in a statement to news outlets that authorities have “decided to pursue phony charges against me 60 days before the midterm election,” calling the charges “nothing more than a partisan political weaponization of the criminal justice system.”

“I am proud to be a leading voice on protecting our borders and building a wall to keep our country safe from drugs and violent criminals,” he also said. “They are coming after all of us, not only President Trump and myself. I am never going to stop fighting. In fact, I have not yet begun to fight. They will have to kill me first.”