Steve Bannon, host of “War Room,” goes on a classic rant about the state of the economy, starting with the $300 trillion of debt that the US is saddled with, thanks to feckless economic policies in the Fed and the Treasury Department.

“The whole structure of the modern world economy is predicated on free money, just printed money, fiat currency, that’s it. $300 million in debt… If Volcker came in and did the Volcker move, his 500 basis point hit, the whole thing would collapse… The phoniness of it is coming to light. The biggest phoniness is in China. The way they powered through 2008 was just to print more…” 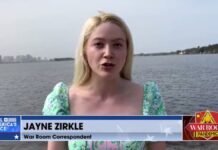 ‘This Demonstration Is Just The Start’: Jayne Zirkle Live From Mar-a-Lago