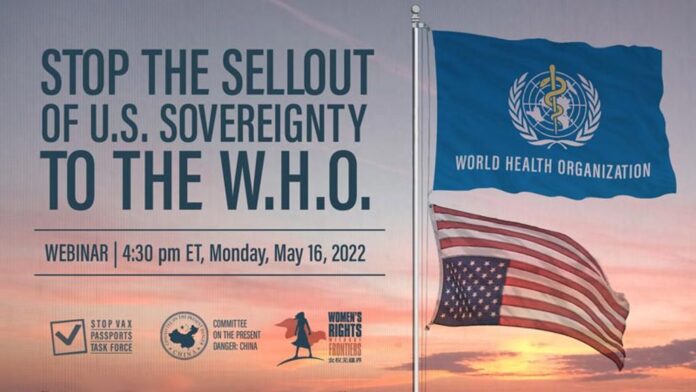 It is appalling that the Biden administration has actually initiated the greatest voluntary surrender of our national sovereignty since our Republic was founded.

As things stand now, at a meeting of the World Health Assembly in Geneva, Switzerland between the 22nd and 28th of May, U.S.-proposed amendments will be adopted that would make the Director-General of the WHO the sole arbiter of what is a “public health emergency of international concern” and dictate how our government and others must respond to it.

The WHO seriously mishandled the Covid-19 pandemic, promoting the lies of the Chinese Communist Party, which lies caused the deaths of millions. Do you want these same non-elected incompetents telling the U.S. how to handle the next pandemic? The WHO could force the U.S. to vaccinate everyone, force mask mandates, lockdowns, and quarantines.

Also, the term, “Public Health Emergency,” is ill-defined and could include not only a viral pandemic, but also a rise in crime rates, climate change, or any other issue that arguably may affect “public health.” Further, the attempt to slip this surrender of sovereignty through quietly as a series of amendments to the current International Health Regulations constitutes an attempt to subvert the treaty process, thus performing an end-run around our legislature and the legislatures of the world.

Frank Gaffney – Co-Host and Moderator
Co-Chair of the Stop Vax Passports Task Force, Vice Chair of the Committee on the Present Danger: China, Host of Securing America TV on Real America’s Voice Network, and founder and executive chair of the Center for Security Policy

Pam Pryor
Who is the W.H.O.?
Senior Bureau Official for International Organizational Affairs, a role overseeing U.S. engagement in the United Nations and other international organizations, during the Trump administration. Before the Bureau, Pryor served as Senior Advisor to the Under Secretary for Civilian Security, Democracy, and Human Rights. Senior Fellow for the Center for Security Policy. [Brief BIO]

James Roguski
Giving U.S. Sovereignty to the W.H.O.
Researcher and analyst who broke the story on pending U.S. amendments to the International Health Regulations [Substack]

Trevor Loudon
Enemies within the U.S. HHS and the W.H.O.
Trevor Loudon is a public speaker, filmmaker and author from New Zealand. Author of “The Enemies Within” and “The Enemies within the Church.” He is an expert on the US and international Left—particularly in relation to infiltration of the Democratic party and the Biden Administration. He is affiliated with the Epoch Times, NTDTV and the Committee for the present Danger-China.

Nick Corbishley
Who is the WHO accountable to?
Journalist, Author of Scanned:  Why Vaccine  Passports and  Digital  IDs  Will  Mean the End of Privacy and Personal Freedom

Hon. Pete Hoekstra
The W.H.O.’s Death Trap for the U.S.
Chairman of the Advisory Board at the Center for Security Policy. He previously served as the United States Ambassador to the Netherlands (2018-2021). He represented the 2nd district of Michigan in the United States House of Representatives (1993-2011). Hoekstra was chairman of the House Intelligence Committee (2004-2007). [Gatestone]

Faith McDonnell
A Call to Action
Director of Advocacy at Katartismos Global. She has been an advocate for persecuted believers and for wider human rights issues for over 30 years. She is the author of Girl Soldier: A Story of Hope for Northern Uganda’s Children. Faith helped draft the 1998 International Religious Freedom Act, organized rallies and protests, and helped draft legislation on religious persecution and trafficking victims. She is co-leader of the Anglican Persecuted Church Network and the Global Anglican Suffering Church Network.

WEBINAR – Stop the Sellout of U.S.  Sovereignty to the W.H.O. 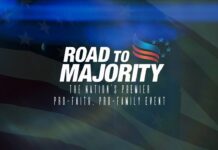 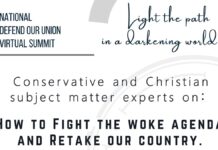