Officials in Harris County, Texas, approved a potential lawsuit against the state’s Secretary of State’s Office over a random drawing that will mean a second election audit for the state’s most populous county.

The county, which includes Houston and has more than 4.8 million residents, is currently undergoing a state-run forensic audit of the 2020 election. The Democratic-controlled county allowed drive-thru and 24-hour voting during the COVID-19 pandemic, which prompted the scrutiny.

State auditors are in phase two of the audit, after about 3,000 potential noncitizens were found on the voter rolls. The county is now attempting to verify the citizenship of those flagged by the state.

The most recent election problem in Harris County occurred during the 2022 primaries, when 10,000 votes were found after the election.

Democrats see the additional audit as pointless, saying that the state’s elections are secure and that Republicans have bought into former President Donald Trump’s calls for investigating claims of potential election fraud.

Harris County Attorney Christian Menefee, a Democrat, told the Harris County Commissioners Court during their Aug. 2 meeting that the secretary of state’s drawing names from a bucket was akin to a “sketch comedy show.”

Menefee questioned the validity of the drawing, saying that the video of the selection didn’t show the entire process. He complained that Harris County wasn’t given notice of the drawing—which the secretary of state’s office denied.

“The camera doesn’t show the paper that was pulled from the bucket,” he said during the meeting. “All these things taken together make this highly suspicious.”

Precinct 1 Commissioner Rodney Ellis suggested during the meeting that Biden’s Justice Department get involved so that “somebody can audit the auditors.”

The commissioners voted during the meeting in favor of pursuing legal action against the secretary of state’s office. 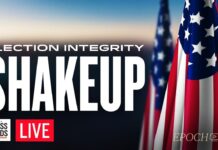