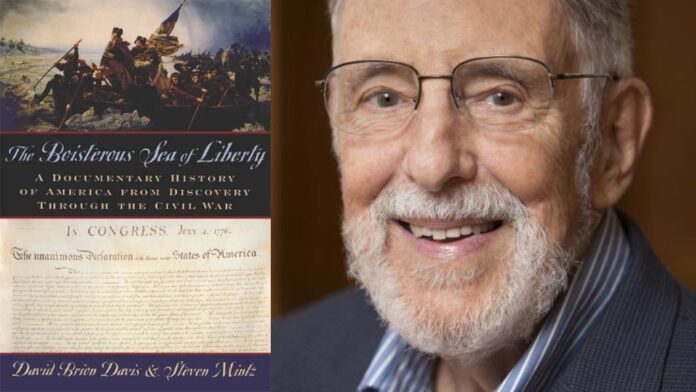 Drawing on a gold mine of primary documents–including letters, diary entries, personal narratives, political speeches, broadsides, trial transcripts, and contemporary newspaper articles–The Boisterous Sea of Liberty brings the past to life in a way few histories ever do.
Here is a panoramic look at early American history as captured in the words of Benjamin Franklin, Thomas Jefferson, George Washington, Andrew Jackson, Abraham Lincoln, Frederick Douglass, Harriet Beecher Stowe and many other historical figures, both famous and obscure. In these pieces, the living voices of the past speak to us from opposing viewpoints–from the vantage point of loyalists as well as patriots, slaves as well as masters. The documents collected here provide a fuller understanding of such historical issues as Columbus’s dealings with Native Americans, the Stamp Act Crisis, the Declaration of Independence, the Whiskey Rebellion, the Missouri Crisis, the Mexican War, and Harpers Ferry, to name but a few.

Compiled by Pulitzer Prize winning historian David Brion Davis and Steven Mintz, and accompanied by extensive illustrations of original documents, The Boisterous Sea of Liberty brings the reader back in time, to meet the men and women who lived through the momentous events that shaped our nation

In historical writing, there’s no substitute for primary sources such as letters and diaries of eyewitnesses and participants. But all too often those sources are handled as minor adjuncts to a text, appearing in truncated form with so little context provided that the immediacy of the material is diluted. The Boisterous Sea of Liberty takes the direct approach of celebrating the primary sources, offering 366 separate documents from colonial times to the Civil War, each presented with a brief yet substantive introduction that provides context as well as entertaining background information about the writers and their subjects. The result is a hefty volume with entries that, as the introduction by coeditor and Pulitzer Prize-winning historian David Brion Davis, puts it, “can have the power of a fax or e-mail just received, evaporating the gap between past and present.” Commendably, editors Davis, a history professor at Yale, and Steven Mintz, a history professor at the University of Houston, have mined deep and wide into the American past in their effort to construct a “documentary history” of the nation up to the Civil War. Not only are there some obvious primary sources, including letters by Washington, Jefferson, and Lincoln, but there are also letters and diary entries by people you may never have never heard of before, but who offer valuable insight and fascinating commentary into the United States’ first century. –Robert McNamara

David Brion Davis is Sterling Professor of History and Director of the Gilder Lehrman Center for the Study of Slavery, Resistance, and Abolition at Yale University. His work has won the Pulitzer Prize, the National Book Award, the Albert J. Beveridge Award, and the Bancroft Prize, among many other honors. He lives in Orange, Connecticut.

Steven Mintz is Professor of History at the University of Houston. He has published works on slavery, American reform movements, and the history of the American family. He lives in Houston.

“A revealing, fascinating view of early America told through the words of the historical figures.”–Albuquerque Tribune
“Intriguing.”–Richmond Times-Dispatch

“The Boisterous Sea of Liberty is an invaluable resource, not o mention an eye-opener to those who believe all history is written in stone.”–Denver Post

“With their new book, The Boisterous Sea of Liberty, David Brion Davis and Steven Mintz remove history from its Ivory Tower and return it to the general public….The book seems alive, full of the voices and sounds of proclamations long defunct.”–New Haven Advocate
“I have used this book now for three semesters and I love it. This is the only book I use in my American History I survey class.”
–Dr. Bruce Walker, Ottawa University

“The closest thing we have to an American primer covering the centuries from the age of exploration through the Civil War. It belongs in the library of anyone who is interested in our past.”–Sean Wilentz, Princeton University
“There is simply no better way to understand the first three-and-a-half centuries of what became the United States than to read this book. Nowhere will readers find more awe-inspiring erudition, a richer diversity of perspectives, or a more powerful portrayal of the people who created this country…”–Edward Ayers, University of Virginia”

[The editors] have created an overwhelmingly informative volume: their own interpretive commentary holds together the quotes they select, some world-famous [and] some revealingly obscure.”–Publishers Weekly

“This compilation of primary source material strives mightily to provide a balanced view of great events from different perspectives….The commentary by Davis and Mintz…provides the necessary context for each category of documents. Although this collection can stand alone as engrossing reading material, it can also prove invaluable as a research tool….”–Booklist