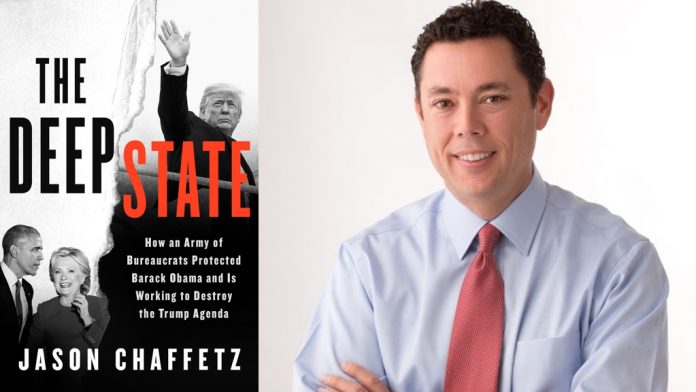 The New York Time bestselling expose on the politicized federal bureaucracy that actively works to promote the Democrat agenda and undermine President Trump.

The liberal media loves to characterize the Obama years as free of scandal. They pretend this is true because virtually every office in the executive branch worked to withhold evidence of wrongdoing, silence witness testimony, destroy federal records, classify embarrassing information, and retaliate against truth tellers. Yet these same tight-lipped lifers leaked like a sieve once President Trump was sworn in, freely promoting the illusion that everything he does is the new Watergate.

Sometimes even conservatives portray the Deep State as nothing more than dumb inefficient bureaucracy. In fact, it’s the opposite; the Deep State is intentional, unconstitutional, and organized.

In Deep State, Jason Chaffetz reveals an entrenched leadership within the civil service that resists exposure, accountability, and responsibility.  At the highest levels, they fight back, outlast, and work the system for their own advantage.  And they certainly don’t like disruptive forces such as Donald Trump.

As Chairman of the House Oversight Committee, Chaffetz was the tip of the spear challenging the Deep State and trying to hold them accountable. He and his colleagues took on the powerful forces at the IRS, the EPA, the DOJ, the Department of State, and more.  The deeper he dove in, the more shocking he found the brazen approach by the power brokers.  The balance of power has shifted. The Deep State has gotten used to operating anonymously and without consequence.  This is a problem bigger than we can even imagine and getting worse.  Unless we do something dramatic to wrest back control, we risk losing the ability to successfully challenge wrongdoing by the most powerful bureaucracy in the world.

In Deep State, author Jason Chaffetz highlights the Deep State’s tactics, illuminates the problems, and offers a way to fight back and win. It is important to expose the stories, but if the American People are going to win, Congress is going to have to do things differently.  This book helps the concerned citizen understand what must be done–so they can demand real change.

“You will gain a whole new appreciation for the success of Donald Trump after reading Chaffetz’s account of the Deep State army working overtime to help his opponents and subvert his allies.”
(Donald J. Trump, Jr)

“Long after you finish this book, you’ll be fuming about our out-of-control federal bureaucracy.  We cannot afford to tolerate the outsourcing of our governance to career bureaucrats whose only loyalty is to big government.”—
(Senator Mike Lee)

“Jason Chaffetz first fought the Deep State from the inside. Now he has written a powerful guide to how it works and how to fight it. Deep State is not to be missed.” (Peter Schweizer)

“A truly chilling call to action that will confirm your worst fears about who our government really serves and how much power Washington DC’s persistent bureaucracy has amassed with help from a complicit press, and both Democrats and Republicans in Congress. Chaffetz reveals how he became a target of the Deep State, and describes the infuriating lengths to which these actors will go to monitor and neutralize threats to their agenda –including placing spies in Congressional offices. You may be startled and shaken, and you will come to know the Deep State is real.” (Sharyl Attkisson)

How did the Deep State become so unstoppable?

The Deep State is real. They don’t like exposure, accountability, or responsibility. They fight back, outlast, and work the system to their advantage. Sometimes even conservatives talk about the Deep State as though it’s just dumb, inefficient bureaucracy.

In fact, just the opposite is true. The Deep State is unconstitutional, organized, and exceptionally good at protecting themselves from supervision.

As chairman of the House Oversight and Government Reform Committee, Jason Chaffetz was the tip of the spear challenging the Deep State and trying to hold them accountable. He took on the powerful forces at the IRS, the EPA, the DOJ, the Department of State, and others. “The deeper I dove in, the more shocking the brazen approach by the power brokers. They were used to operating anonymously and without consequence. This is a problem bigger than we can even imagine and getting worse unless we do something dramatic to wrestle back control.”

His stories are as enraging as they are endless. Every department employs highly paid workers whose primary role is to keep their work secret from Congress and the public. Every department has an agenda they believe cannot be constrained by the democratic process. Every department is filled with people who believe they deserve steadily rising paychecks for less work than they would have to do at a private company.

While this metastasizing corruption tends to support Democrats, they will work with any party that lets them grow unchecked. That’s why they feel they must stop the anti-establishment agenda of Donald Trump.

The Deep State has been in place for a long time. In this surprisingly entertaining and optimistic book, Jason Chaffetz highlights their tactics, illuminates the problems, and offers a way to fight back and win.

Jason Chaffetz is an American politician and Fox News contributor. He was elected as a U.S. Representative from Utah in 2008 after spending 16 years in the local business community. When he left Congress in 2017, he was the chairman of the United States House Committee on Oversight and Government Reform.