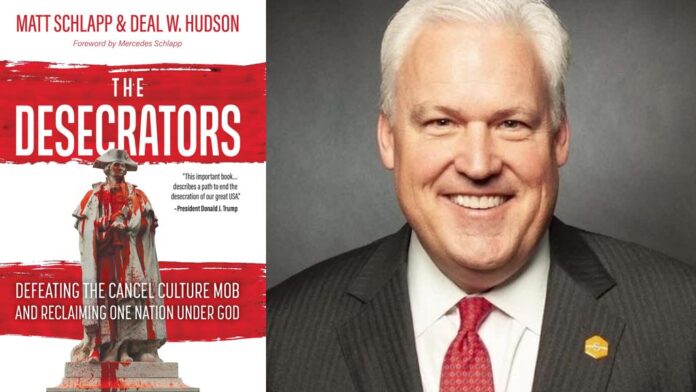 The enemy is no longer hidden in the dark but instead operates in broad daylight. Its attacks on Americans are clear and intensifying: cancel culture, wokeness, public shaming, urban violence, “whiteness,” and critical race theory. The enemy also seeks to undermine the sacredness of human life, failing to provide basic protection for the lives of the unborn. This enemy is called the Desecrators. The Desecrators tear down not only monuments but human nature, the biblical-natural conception of marriage, the family, parental rights, fact-based education, traditional moral values, and the Church. The Desecrators are taking over the media, publishing, educational institutions, corporate boards, labor unions, amateur and professional sports, foundations, and professional associations ranging from the American Medical Association to the Chamber of Commerce. They leave nothing untouched.

In this powerfully provocative book, Deal W. Hudson and Matt Schlapp provide firsthand accounts of the Desecrators’ actions and intentions, including their remarkably angry and uncharitable treatment of President Donald Trump, which Hudson and Schlapp uniquely observed. The authors also describe how Catholics have been stifled for years because many bishops have failed to confront pro-abortion Catholic politicians. But fortunately, there is hope. As Hudson and Schlapp lay bare the Desecrators’ path of destruction, they also lay out a plan for the faithful to turn things around. Here is a book that will embolden all people of faith and good will to make their voices heard once again in the public square and political realm by countering the enemy with reason, faith, and hope. Here is a vision to build up rather than tear down.

“I have valued Matt’s help ever since we met as I was preparing to run for president. He and his wonderful wife, Mercedes, are DC insiders who love their country and assisted me in many ways as we won and began to change Washington and the world. This important book, coauthored by Deal Hudson, describes a path to end the desecration of our great U.S.A.”
— President Donald J. Trump

“American Marxists seek to change and destroy every founding principle of our American experiment.  They have invaded virtually every aspect of our culture and our institutions, and they are determined to prevail. American patriots must actively fight against the Marxists’ destruction of American ideals. And we must win. Matt Schlapp and Deal Hudson‘s The Desecrators details the actions of the American Marxists, how we can fight back, and what we must do to save America from desecration.  A must read!”
—Mark Levin, author of American Marxism

“The unraveling of America is now at a furious pace, and this is just the book to capture what has been happening and why. Unlike reformers of the past, today’s activists seek not to improve but to tear down: their anarchist thumbprints are everywhere apparent. Both of the authors have had a distinguished career in politics and in Catholic circles, and the poignant anecdotes they share gives the book a personal touch. They cover much ground, and they do it with considerable flair.”
—Bill Donohue, PhD, president, Catholic League for Religious and Civil Rights

“As the authors remind us that Jesus is at the heart of all that is sacred, we must remember to follow His example and pray that the desecrators turn away from the anxiety, division, and unbelief they have sown. This book is a clarion call in this critical hour.”
—Dr. Alveda King, niece of Dr. Martin Luther King Jr.

“Deal Hudson and Matt Schlapp perceptively read the moment and expose the nature of the threats to foundational American and human ideals, including the assault on life itself and the most innocent among us. There is no one better to outline where we’re headed and how the obstacles can be successfully overcome than these two visionary men of faith, who so generously share their insight. The Desecrators is filled with both urgency and vital hope for the America future generations will inherit.”
—Marjorie Dannenfelser, president of the Susan B. Anthony List

“In this must-read book, Deal Hudson and Matt Schlapp analyze what Yale law professor Stephen L. Carter once called ‘the culture of disbelief’ and Richard John Neuhaus decried as the ‘naked public square.’ The systematic attempt to marginalize people of faith and thereby undermine America’s Judeo-Christian foundations is not new, but its codification as cancel culture is. The authors urge that we reaffirm the faith of our founders and, most critically, provide a realistic plan to win.”
—Ralph Reed, political consultant

“If you want to know how to live as a patriotic Christian American today, fully aware of the dangers of our times and yet strengthened by hope, The Desecrators is the book to read. It will ground you in reality; it will make you want to jump up and fight for what is right; it will challenge you, in the spirit of the Founders and of the martyrs, to give your all for America and for the Gospel!”
—Fr. Frank Pavone, national director, Priests for Life
President, National Pro-life Religious Council

“The Desecrators is an admirable counter-revolutionary tract which will prove exemplary to many forthcoming counter-revolutionary declarations, in the coming years.  Indeed, it has already affected the way in which I am writing my own.”
—Timothy J. Gordon, co-author of Rules for Retrogrades: Forty Tactics to Defeat the Radical Left

Matt Schlapp is married to Mercedes Schlapp, and they are raising five daughters outside of Washington, DC. Matt is Chairman of CPAC, which hosts the largest annual political conference in America and has brought CPAC to Japan, Australia, Korea, and Brazil, with plans to ramp up in Jerusalem, Hungary, and many other countries. CPAC scores the votes of all elected legislators and engages in politics and media regularly. Schlapp is a conservative voice who battles on all major media platforms and advises conservative elected offices across the country.

Deal W. Hudson, PhD, is the host of Church and Culture on the Ave Maria Radio Network. Hudson is the former editor of Crisis Magazine and former head of Catholic Outreach for the presidential campaigns of George W. Bush. A convert to Catholicism at the age of thirty-four, Hudson taught philosophy for fifteen years before entering the world of Catholic publishing and politics.