Home Previews Books The Doctrine of the Lesser Magistrates: A Proper Resistance to Tyranny and... 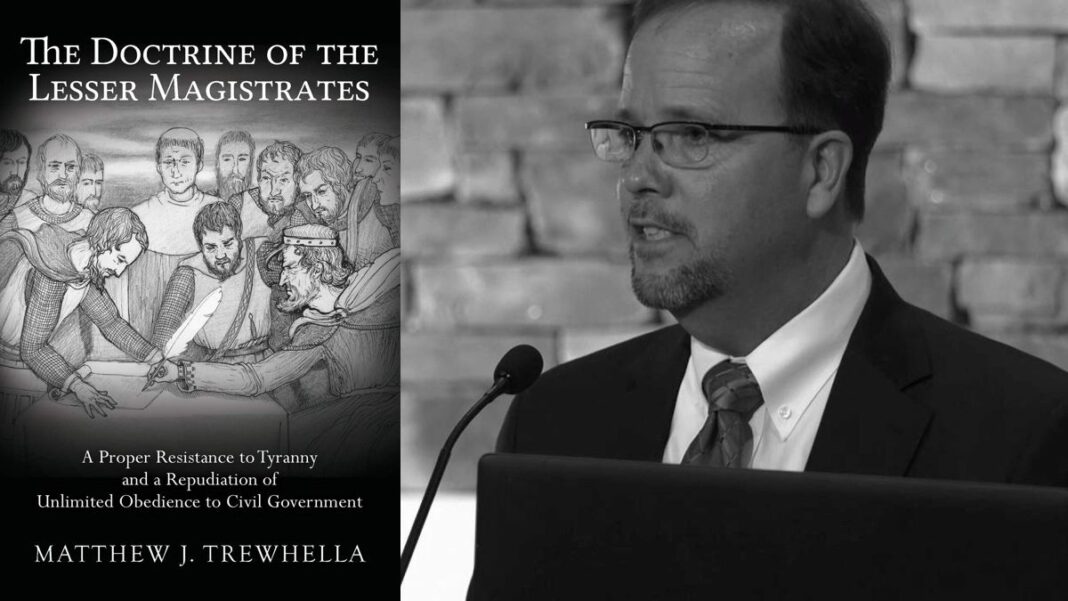 America has entered troubling times. The rule of law is crumbling. The massive expansion of Federal government power with its destructive laws and policies is of grave concern to many. But what can be done to quell the abuse of power by civil authority? Are unjust or immoral actions by the government simply to be accepted and their lawless commands obeyed? How do we know when the government has acted tyrannically? Which actions constitute proper and legitimate resistance?

The Doctrine of the Lesser Magistrates places in your hands a hopeful blueprint for freedom. Appealing to history and the Word of God, Pastor Matthew Trewhella answers these questions and shows how Americans can successfully resist the Federal government’s attempts to trample our Constitution, assault our liberty, and impugn the law of God.

Historically, this doctrine was practiced before the time of Christ and Christianity. It was Christian men, however, who formalized and embedded it into their political institutions throughout Western Civilization.

The Doctrine of the Lesser Magistrates is a historic tool that provides proven guidelines for proper and legitimate resistance to tyranny, often without causing any major upheaval in society. The doctrine teaches us how to rein in lawless acts by government and restore justice in our nation. “Use this sword against my enemies, if I give righteous commands; but if I give unrighteous commands, use it against me.” -Roman Emperor Trajan, speaking to one of his subordinates This is the first book published solely addressing the doctrine of the lesser magistrates in over 400 years. Matthew Trewhella is the pastor of Mercy Seat Christian Church. He is a graduate of Valley Forge Christian College. He and his wife, Clara, have eleven children and nine grandchildren, and reside in the Milwaukee, Wisconsin area. His research and teaching on the lesser magistrate doctrine is reshaping the thinking of Americans. He was instrumental in publishing the Magdeburg Confession in 2012 – the first English translation of the document since it was written in 1550.

Buy The Doctrine of the Lesser Magistrates

Matt Trewhella was born in 1960, and raised in the city of Detroit, Michigan. His parents were divorced at a young age. He lived a life of sin and crime, including being part of a gang on the east side of Detroit. In 1978 he was converted to Christ – a radical transformation in his life! He married Clara Tolnai in 1981, and they have eleven children and ten grandchildren. Matt has been the pastor of Mercy Seat Christian Church http://mercyseat.net since 1988. He is the founder of Missionaries to the Preborn http://missionariestopreborn.com which is a pro-life group located in Milwaukee, Wisconsin where he and his wife reside. His actions on behalf of the preborn is what first interested him in governmental matters. Matt served 14 months in jail for interposing at the doors of abortion clinics. Matt preaches regularly and writes articles. Believing that Christianity should impact every area of his life and every area of life, he has commenced http://lessermagistrate.com. His desire is to live a godly life by being a faithful husband and father and both build and leave a legacy through their family. He is at war with Pietism.

Buy The Doctrine of the Lesser Magistrates