On February 25, 1964 American boxer Muhammad Ali, known at the time as Cassius Clay, became the world heavyweight champion by knocking out Sonny Liston in seven rounds.

Muhammad Ali was born as Cassius Marcellus Clay, Jr. on January 17, 1942 and he died on June 3, 2016. He was an American Olympic and professional boxer and activist. He is widely regarded as one of the most significant and celebrated sports figures of the 20th century. From early in his career, Ali was known as an inspiring, controversial and polarizing figure both inside and outside the ring.

President Trump Presents the Medal of Freedom to Lou Holtz 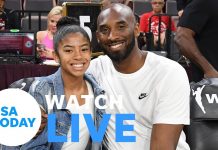