Home Keep Up U.S. Elections The Futile Efforts to Disbar Lawyers Across the Country 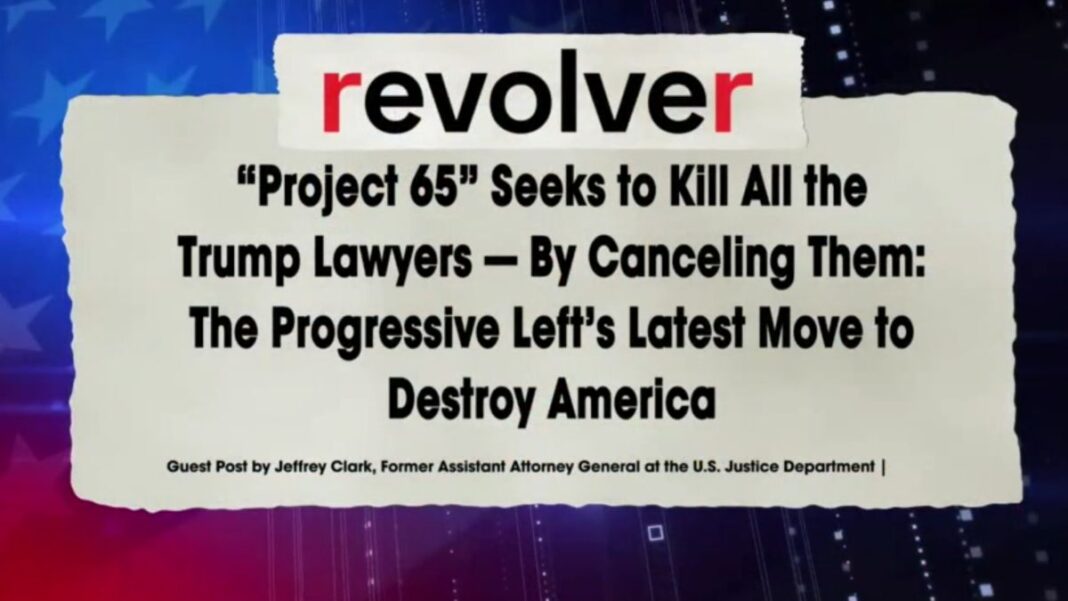 Jefferey Clark, who was the acting attorney general after William Barr was fired, talks about the 65 Project, which is an effort by the progressive left to get attorneys who supported Trump disbarred. Apparently, they think that no one who alleges election fraud should be able to be represented in court. Scary!

“Project 65” Seeks to Kill All the Trump Lawyers — By Canceling Them: The Progressive Left’s Latest Move to Destroy America

As Shakespeare famously wrote in Henry VI Part II: “The first thing we do, let’s kill all the lawyers.”

Even for me as a lawyer, it’s hard not to sympathize with that sentiment. Lawyers are a drag. But in reflective moments, I’m more partial to Sir Thomas More’s line from Robert Bolt’s A Man for All Seasons: “And when the last law was down, and the Devil turned ‘round on you, where would you hide, Roper, the laws all being flat? This country is planted thick with laws, from coast to coast, Man’s laws, not God’s!”

The evenhanded application of the law is a principle that must be defended. Everywhere, balance and perspective are under attack. Whatever the costs of America’s process-heavy adversarial contests, that feature of our polity is a key bulwark of liberty. Due process is not something to be trifled with, deconstructed, or thrown away based on the passions of the political moment.

Yet that is happening, right now. The Left has set the lines of battle: Any lawyers who worked for President Trump with verve and ingenuity, along with any lawyers he retained to mount his various 2020 election contests, must be crushed, must have their noses rubbed into the dirt, must if possible lose their jobs and even their right to practice law. It’s not right, just as it would not have been right to demonize the lawyers who mounted Al Gore’s challenges to the 2000 presidential election in Florida.

On the Left, the constant rallying cry is “Remember January 6!” It’s like a woke version of “Remember the Alamo!”, designed to divide and conquer instead of unite the nation in the spirit of apple-pie American patriotism. For those who know me, I’m a lot more partial to traditional patriotism than to false and cynical attempts by MSNBC and its ilke to use the aberration of January 6 as some kind of Rosetta Stone to American politics. As James O’Keefe has recently brought to light, even Matthew Rosenberg of the New York Times secretly knows I’m right.

Project 65 and Its Despicable Aims

When the Left wants something, you can be sure that limitless streams of money will soon pour forth to fund their destructive crusade. Recently, Axios profiled something significant you might have missed: “Project 65,” a new initiative funded by millions in “dark money” to destroy as many Trump-affiliated lawyers as possible.

At the retail level, Project 65’s purpose is to file bar complaints against 111 lawyers wherever they are licensed. At the wholesale level, it seeks to amend state bar rules, so that no lawyers with a sense of self-preservation will ever again want to bring election-related contests on behalf of President Trump, or any other populist conservative candidate. According to Project 65, everyone secretly knows that elections in Atlanta, Chicago, or Philadelphia (my home town) are entirely aboveboard, so any legal challenges to them must be in bad faith. My Mom’s stories from decades of poll watching in Philadelphia must have been hallucinated, and a slew of election fraud cases in Philadelphia must have magically disappeared from the annals of the law. The Chicago corruption of Mayor Daley in the 1960 presidential election is an old wives’ tale. Election fraud in America simply doesn’t exist. Of course, some exceptions exist—for Democrat complaints of voter fraud, of course. Don’t expect Project 65 to file a bar complaint any time soon against losing candidate Stacey Abrams over her frequent claims to be the legitimate governor of Georgia.