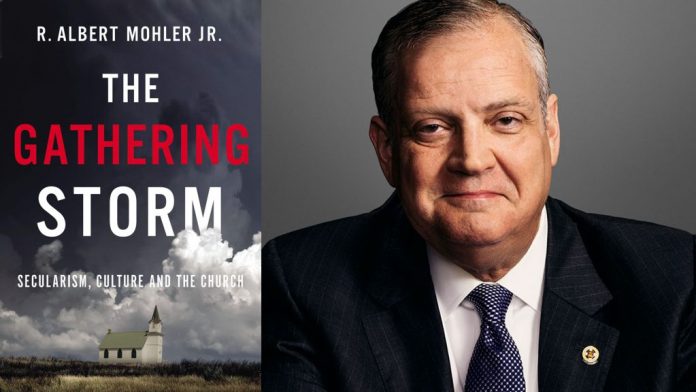 The president of Southern Seminary reveals how secularism has infiltrated every aspect of society and how Christians, equipped with the gospel of Jesus Christ, can meet it head on with hope, confidence, and steadfast conviction.

From threats to religious liberty and redefinitions of marriage and family to attacks on the sacredness and dignity of human life, the perils faced by the West and the church are unprecedented. How should Christians respond to this challenge? The Gathering Storm provides the answer, addressing each dimension of culture and showing Christians how to give an answer for the hope that is within them and how to contend for the faith that was once and for all delivered to the saints.

R. Albert Mohler Jr. has been called “one of America’s most influential evangelicals” (Economist) and the “reigning intellectual of the evangelical movement” (Time.com). The president of the Southern Baptist Theological Seminary, he writes a popular blog and a regular commentary, available at AlbertMohler.com, and hosts two podcasts: The Briefing and Thinking in Public. He is the author of many books, including We Cannot Be Silent and The Prayer that Turns the World Upside Down, and has appeared in the New York Times, the Wall Street Journal, USA Today, and on programs such as NBC’s Today, ABC’s Good Morning America, and PBS NewsHour with Jim Lehrer. He and his wife, Mary, live in Louisville, Kentucky.

Dr. Mohler has been recognized by such influential publications as Time and Christianity Today as a leader among American evangelicals. In fact, Time.com called him the “reigning intellectual of the evangelical movement in the U.S.”

In addition to his presidential duties, Dr. Mohler hosts two programs: “The Briefing,” a daily analysis of news and events from a Christian worldview; and “Thinking in Public,” a series of conversations with the day’s leading thinkers. He also writes a popular blog and a regular commentary on moral, cultural and theological issues. Called “an articulate voice for conservative Christianity at large” by The Chicago Tribune, Dr. Mohler’s mission is to address contemporary issues from a consistent and explicit Christian worldview.