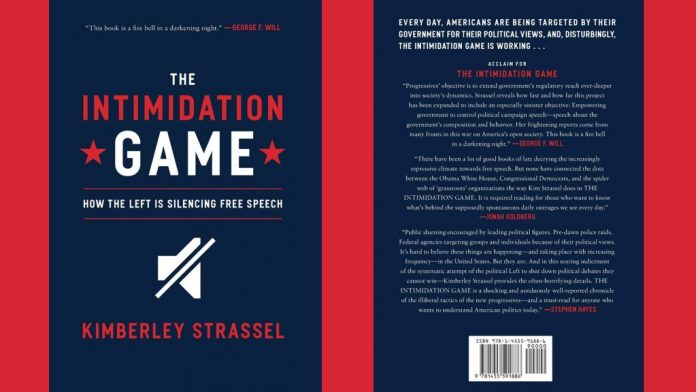 From Kimberly Strassel-one of the preeminent political columnists writing today and member of the Wall Street Journal editorial board-comes The Intimidation Game: How the Left Is Silencing Free Speech, an insightful, alarming look at how the Left, once the champion of civil liberties, is today orchestrating a coordinated campaign to bully Americans out of free speech.

For nearly 40 years, Washington and much of the American public have held up disclosure and campaign finance laws as ideals, and the path to cleaner and freer elections. The Intimidation Game will show, through first-hand accounts, how both have been hijacked by the Left as weapons against free speech and free association, becoming the most powerful tools of those intent on silencing their political opposition. The Intimidation Game provides a chilling expose of political scare tactics and overreach, including:

THE INTIMIDATION GAME will shine a much-needed light on how liberal governance and the Democratic machine bullies the political process.

“Progressives’ objective is to extend government’s regulatory reach ever-deeper into society’s dynamics. Strassel reveals how fast and how far this project has been expanded to include an especially sinister objective: Empowering government to control political campaign speech-speech about the government’s composition and behavior. Her frightening reports come from many fronts in this war on America’s open society. This book is a fire bell in a darkening night.”―George F. Will

“There have been a lot of good books of late decrying the increasingly repressive climate towards free speech. But none have connected the dots between the Obama White House, Congressional Democrats, and the spider web of ‘grassroots’ organizations the way Kimberly Strassel does in THE INTIMIDATION GAME. It is required reading for those who want to know what’s behind the supposedly spontaneous daily outrages we see every day.”―Jonah Goldberg

“Public shaming encouraged by leading political figures. Pre-dawn police raids. Federal agencies targeting groups and individuals because of their political views. It’s hard to believe these things are happening-and taking place with increasing frequency-in the United States. But they are. And in this searing indictment of the systematic attempt of the political left to shut down political debates they cannot win-Kimberly Strassel provides the often-horrifying details. THE INTIMIDATION GAME is a shocking and assiduously well-reported chronicle of the illiberal tactics of the new progressives-and a must-read for anyone who wants to understand American politics today.”―Stephen Hayes

“Strassel draws a timely, convincing, and alarming picture of liberal governance and a

“An eye-opening lesson in the law of unintended consequences: where “a vast new disclosure regime” intended to curb corruption has spawned a corruption all its own.”―Kirkus Reviews