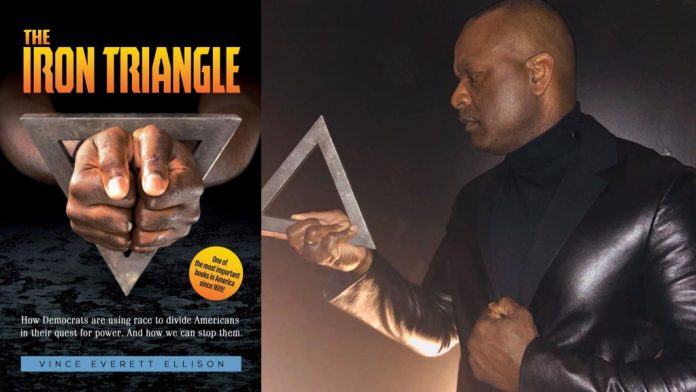 To save America and the world, Conservatives must first answer this one very important question: Why do the vast majority of Christian African Americans vote for the Atheist/Anti-Christian, Liberal Democrat Party?

The Iron Triangle by Vince Everett Ellison answers that question. Why is this important? The answering of this question and the implementation of the suggested remedies will greatly improve America’s chances of ushering in an enlightened era of freedom and prosperity, while critically damaging its primary source of evil: The Democrat Party. This evil party could not survive without 90% of Christian African American vote.

Conservatives wonder: Why would African Americans forsake their children, spouses, communities, lives, freedom and GOD for the Democrat Party? Presently, Democrats control every Black ghetto, every failing Black school, every drug corner and every prison in America. Amazingly, the majority of African Americans love them for it. Why? This book explains it.

The Iron Triangle argues that falsely accused White Christian conservatives have nothing more for which to apologize. Despite slanderous accusations of racism and hatred, The Iron Triangle reassures Conservatives, and encourages them to press forward. The real oppressors are now unmasked. To control African Americans during and after the Civil Rights Movement, White Democrats organized and formed an unholy alliance with most Black preachers, Black civic organizers and Black politicians. I call this trifecta the “Iron Triangle.” It has worked perfectly.

The Iron Triangle exposes the greatest continuous betrayal in history: The betrayal of America in general, and of Black America in particular by the Democrat Party and the Iron Triangle. It utilizes lessons and anecdotes from my life experiences in the Jim Crow South, in the Black church, as a correctional officer, leading civic organizations, and involvement in politics to illustrate these facts. It traces the origins and explains the rationale behind the Black community’s fatal attraction to the oldest and most prolifically evil organization in history. It further explains how liberals have used this deadly infatuation to take over the Democrat Party and America.

The Iron Triangle explains why undermining Christianity and inciting racial discord between Black and White Christians is essential to Democrat Party survival. It explains why Democrat Party leadership believes the gospel of Jesus Christ is poisonous, racial reconciliation is catastrophic, and atheism is necessary. This book explains how their plans can be countered. It is a primer, designed to teach Conservatives how to communicate with a Democrat who has been indoctrinated with a lifetime of lies. This book teaches history, psychology, religion, philosophy and truth. So let’s talk to and reason with our brothers and sisters in Christ, and our fellow countrymen. Then, lets dismantle this Iron Triangle and save America.

Vince was born on a cotton plantation in Haywood County in West Tennessee to parents who, at the time, were sharecroppers. Through hard work and faith in Jesus Christ, his father prospered in the insurance industry, pulling himself and his seven siblings out of poverty and into the middle class. The Ellison Family gospel singing group was formed when Vince was in grade school. The group continued performing through his college years with broad exposure in the Black Church and gospel music community. Through his experiences in gospel music, Vince gained intimate knowledge of the inner workings and failings of many of the Black Ministers in the Black Church.

Vince studied academically at Memphis State University; however, he received a real-world education while working as a correctional officer at a maximum-security prison in South Carolina. Vince later worked in the non-profit arena with many African American civic organizations. He experienced the underworld of politics in 2000 after becoming the Republican nominee in the 6th Congressional District of South Carolina.

These many life experiences have given Vince a unique insight. From this vantage point, he has been able to recognize, dissect, expose, and answer many of the questions regarding race, religion, and politics that have dogged America for years. His books, blogs, interviews, and podcasts share required knowledge for all Americans who desire understanding, reconciliation, and freedom.