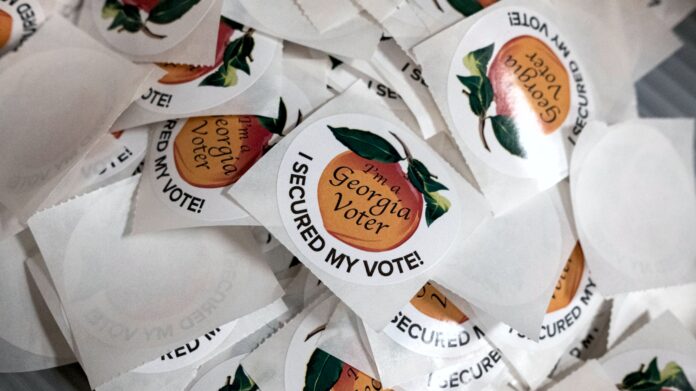 Of course all of the leftist grandstanding over the new Georgia voter law is hysterically overblown. Americans who value the integrity of elections are fully aware of how important it is to leftists to “protect” their ability to lie and cheat at the polls. We’ve been watching their antics for years. But the latest law passed in Georgia for the purpose of cleaning up election fraud may be brewing up to be the “perfect storm” for leftists, which is why they are obsessed with denigrating and overturning it.

For starters, their entire onslaught against the State of Georgia is right out of Saul Alinsky’s “Rules for Radicals.” The immediate goal is clearly to bully Georgia into reversing its current course of ensuring that voters are who they say they are, and only vote once. Even this amount of lawful supervision at Georgia polling places would drastically change the results of its elections. Yet the stakes are higher still.

Specifically within Georgia, leftist Democrats have too much to lose on several fronts from legitimate elections. First, the left cannot afford a major shift in Georgia election results on account of honest voting. The rest of the nation would be only too aware of the cause and effect relationship between properly identified voters and the sudden lapse in leftist political fortunes.

Furthermore, despite all the current squalling of “discrimination,” it would be nearly impossible to put an actual disenfranchised voter on display as a genuine victim of “vote suppression.” The only examples of “suppressed voters” would be those who attempted to vote fraudulently. Case closed. So instituting the Georgia law has the potential to dispel both prominent leftist Democrat myths. And it is for this reason, more than any other, that the left is intent on destroying it.

Leftist Democrats are energized by their sanctimony, and all of the corporate collaboration with their effort to maintain the institutionalized corruption of Georgia elections. So if they are able to “freeze and isolate” Georgia (Per Alinsky) by forcing state officials to stand down in the face of the bludgeoning they are receiving, the chances are very good that no other state would be willing to face such leftist backlash. It is crucial to future leftist election thefts that they quickly destroy the Georgia law to eliminate it as a possible trend setter. Killing proper voter ID in Georgia may well kill it in several other states for the foreseeable future. And that is what leftists hope to accomplish.

In light of all this, it should be no surprise that the same corporate entities who sought to shut down any real investigation into the flagrant corruption and vote fraud of the 2020 Presidential Election are now lining up behind the leftist Democrats attacking Georgia. The stolen 2020 Election was precisely how the left intends to politically dominate America going forward. Big tech and the Fake News mob are still reveling in their successful heist, and must stop this potentially fatal threat to their ascendancy at all cost.

In the past, they have been able to discourage any effort at voting integrity by spewing their standard accusation of “racism.” Yet in so doing, they reveal once again that the real bigotry and racial exploitation resides where it always has, which is within the Democrat Party and its leftist base. The current corporate tantrums and threats against Georgia are hardly examples of “deference” to minorities, but instead reflect total condescension and abject contempt for them as hapless “minions” of the Democrat political machine. The whole ruckus presumes them to actually be incapable of functioning as adults in society. Sadly, some black leftists are willing to accept that role, believing that it somehow “empowers” them.

Genuine patriots of every ethnicity know that they are fully capable of legally identifying themselves as the need arises. And Democrat political operatives are likewise perfectly willing to demand proper identification for entry into any major party gathering. Do they really consider their own voting base incapable of functioning on that level?

According to an April 2 report in “The Blaze,” the Biden cabal is responding to the mess it deliberately created at the border by shipping masses of illegal invaders to various places around the country. So the next phase of the dismantling of America is already underway. And for this insidious plot to have its intended impact on voting demographics, proper voting ID must be thoroughly dismantled. Georgia is moving in precisely the opposite direction of the leftist Democrat strategy, with many other states likely to follow, the moment the positive results of Georgia’s efforts are known.

Look for leftist Democrats to employ every legal and illegal means of preventing any restoration of voting integrity, whether in the Peach Tree State, or any other state that might consider following a similar course. America saw the “end game” of the left last November, and is watching in horror as its dire repercussions now spread across our Nation like a disease. From lies, to intimidation, to the real Fascism of corporate empowerment and bullying on behalf of a despotic government, leftist Democrats are not about to allow anything to stop their onslaught.

President Trump is calling on all decent Americans to stand up to this abomination, by refusing to do business with any company that wields itself as a leftist Democrat weapon against the people of Georgia. And Americans had better face the grim reality of where we actually are. Unless “We the People” engage this enemy in every possible manner, it will continue its malignant quest to totally dominate and subjugate us.