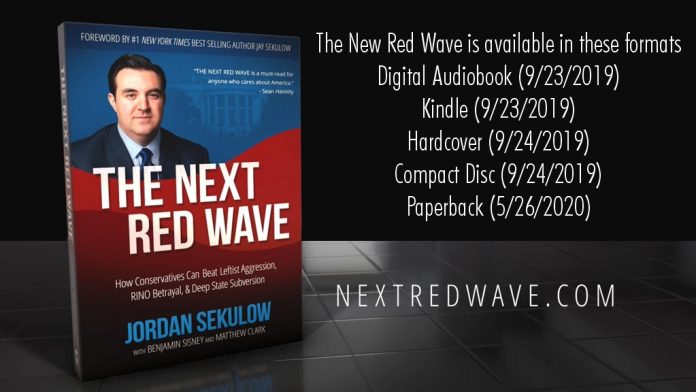 In The Next Red Wave: How Conservatives Can Beat Leftist Aggression, RINO Betrayal & Deep State Subversion, Popular radio host and conservative legal and political commentator Jordan Sekulow offers an action plan that will bring real change to government and help secure the future of our nation.

The next red wave is coming on election day, Tuesday, November 3, 2020.

We face battles on many fronts. The Deep State bureaucracy will stop at nothing to undermine the conservative agenda, even when that’s the agenda chosen by the American voter. The liberal bureaucracy will continue to work alongside former liberal government officials from, yes, the Obama Administration and Team Clinton. In this election, the Left’s prized goal – exclusively – will be defeating President Donald Trump by whatever means necessary.

A red wave that surpasses the turnout and figures of the historic 2016 election will be the only way to win. Our opponents won’t be caught off guard by President Trump again. I promise you, the DNC and liberal activists organizations began working on plans to defeat President Trump in 2020 before he was even inaugurated in 2017. In fact, we have evidence of FBI officials attempting to undermine President Trump as he was preparing to take the Oath of Office.

So-called “progressives” and the radical Left relentlessly force their liberal agenda on the American people. Even when Republican majorities control both houses of Congress, the deck can feel stacked against us. The confirmation hearings for Justice Kavanaugh are a good reminder about the chaos liberals can cause even when they are in the minority. Now, Democrats control the House of Representatives while Republicans maintain control of the U.S. Senate.We deserve better. All Americans deserve better.

We deserve politicians who keep their promises. The only way to force action and hold our elected officials accountable is to know the issues and engage the political process. But it’s more than just fulfilling our civic duty at the ballot box. It’s being actively engaged in public discourse in between elections. Battles – important battles – are won far more often in the court of public opinion than in any federal courtroom. These battles affect our lives every single day.

It’s time to fight back and come together to generate the next red wave. We can’t wait another moment. Now is the time to do it. It really is up to us. The clock is ticking.

Jordan Sekulow is the author of The Next Red Wave, and a lawyer, radio talk show host, political consultant, former Washington Post blogger, and co-author of the bestseller The Rise of ISIS. A veteran of three presidential campaigns, Jordan now serves as the Executive Director at the American Center for Law & Justice (ACLJ), an international public interest law firm and educational organization founded by his father, Jay Sekulow, Chief Counsel for the ACLJ. Jordan lives in Nashville, TN, with his wife and daughter.