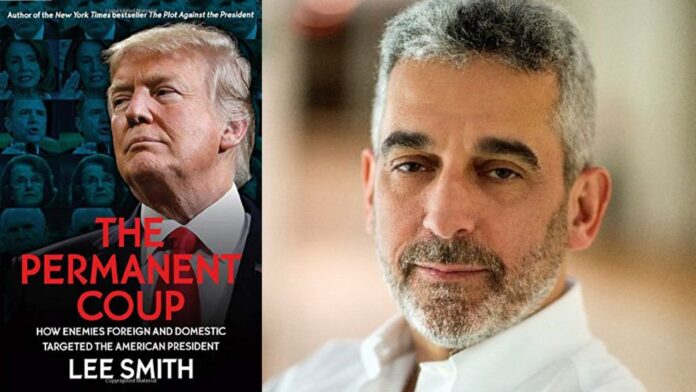 From the phony Russia collusion narrative to the coordinated riots laying waste to US cities, it’s the same ongoing operation orchestrated by the left and targeting not just President Trump but hundreds of millions of Americans who revere their country and what it stands for. For the first time, crusading investigative journalist Lee Smith reveals who was responsible and the never before known involvement of Barack Obama, Joe Biden, and senior military officials who engineered a coup against a sitting president.

Beginning in late 2015, political operatives, intelligence officials, and the press pushed a conspiracy theory about Trump-he was a Russian asset and spied on his campaign and his presidency in order to undo an election.

Because the ultimate goal of the anti-Trump operation is not simply to topple the president but rather to change the character and constitution of the country, the Deep State’s machinations didn’t stop even after Trump was cleared of charges of “colluding” with Moscow. Their efforts became even more fierce, more desperate, and more divisive, threatening to scar America permanently.
In their zeal to bring down President Trump, Deep State conspirators had unwittingly revealed the origins of the anti-Trump operation and exposed corruption at the very highest levels of the Democratic party-including former Vice President Biden and his boss, Barack Obama.

Lee Smith brings to this story the same incisive reporting and commentary that distinguished his runaway bestseller, The Plot Against the President. His investigation, identifying crimes and abuses committed by senior US officials, was later confirmed by a major Department of Justice report.

Lee Smith is a veteran journalist whose work appears in Real Clear Investigations, The Federalist, and Tablet. He’s worked in media for thirty years, writing about national politics, foreign policy, and the press. Smith reported from the Middle East for a decade after the 9/11 attacks and wrote the critically acclaimed The Strong Horse: Power, Politics, and the Clash of Arab Civilizations. A Senior Fellow at the Hudson Institute, Smith is a frequent guest on television and radio, national and international, including Fox News, CNN, and France 24. Smith was born in San Juan, Puerto Rico and was raised in New York City. He now lives in Washington, DC.