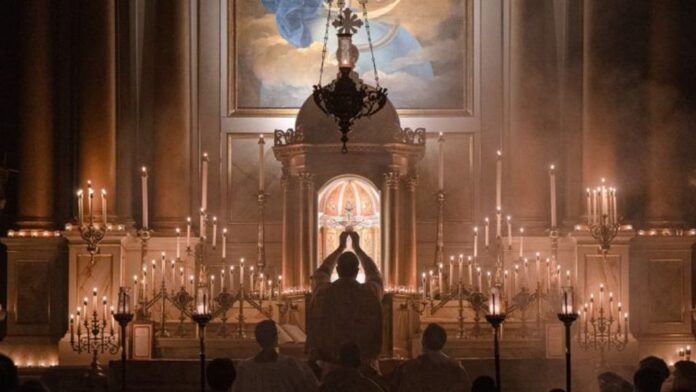 Eric Sammons of Crisis Magazine talks about his new article “The Spiritual Abuse Continues” and about his concern for the way that Pope Francis is restricting traditional Catholic beliefs.

“For some reason, Pope Francis seems to think that people who attend the traditional Latin Mass … are the biggest problem in the church today. When in fact, as most people know, the Catholic Church has been crumbling for some time now… Millions of people are leaving the Catholic Church. It’s the traditional Catholic Mass that’s actually growing, it’s the one thing, the one part of the church that is growing, is traditional mass. And for some reason the pope thinks this is the thing we have to shut down. … And I think it’s because it’s the one group in the church that recognizes the emperor has no clothes.

Pope Francis continues his war on the traditional celebration of the Sacraments. This morning, a week before Christmas, the Congregation for Divine Worship (CDW) issued Responses to 11 “Dubia” (so the Vatican can answer dubia!) concerning the implementation of Traditionis Custodes, the pope’s July motu proprio that sought to restrict the traditional Latin Mass and traditional forms of the other Sacraments.

These new directives are startling in their reach: they eliminate traditional confirmations and ordinations, forbid a priest from celebrating both a Novus Ordo Mass and traditional Latin Mass on the same weekday, and require even TLM-only priests like those of the FSSP to concelebrate a Novus Ordo Mass. The pretense that a diocesan bishop has authority over the liturgy in his diocese is finally discarded. And like the original motu proprio and the letter that accompanied it, these Responses make the pope’s goal clear: he wants to eliminate the old Roman Rite, and he’s growing impatient to see it happen.

There’s only one way to put this: these are wicked commands.

It might be diplomatic to try to sugarcoat this, but in a time of war diplomacy is set aside. And make no mistake: this is a war, and it’s been declared by the pope himself on any Catholic with an attachment to the old forms of the Roman liturgy. To pretend—as the CDW Responses do—that this is somehow for the good of souls is a lie we should no longer gloss over.

Further, these are petty and vindictive commands. They resemble a Soviet purge of dissidents conducted in 1988. The walls are crumbling around the Church, and instead of trying to repair them, the pope and the Vatican are tearing down the one solid wall so it can match the rest. The fact that these directives were issued a week before Christmas only magnifies their pettiness.

A few years ago a friend said that he believed Pope Francis was a spiritually abusive father. I instinctively cringed. To my innate Catholic sense, such language was inappropriate to be directed at the Holy Father. But I can’t see how his actions regarding the old Rite can be seen as anything other than abusive.

An abusive father is a master at manipulation. He makes his children think they are the problem. He warps reality so that they think they “deserve” their abuse, and if they dare challenge it, he casts them as unloving and divisive family members. His children live in a constant state of self-doubt and confusion.

This is how the Holy Father treats those of his children who are attached to the old ways. If they find their spiritual life enriched by attending the TLM, he suggests they have schismatic tendencies. If they find their parish Mass to be unfulfilling in its entrenched mediocracy, he accuses them of rejecting Vatican II. When they complain at his unjust treatment of them, he says that proves they need further correction. It’s spiritual abuse, plain and simple.

Attendance at traditional Latin Masses has grown tremendously in the last decade, particularly in the past two years. What has fueled this growth? Is it a sudden desire to “reject Vatican II?” Is it a swift increase in feelings of nostalgia? I don’t think so.

I’ve spoken to many people in the last year who started attending the TLM only recently. I’ve found that they are not the nostalgic, anti-Vatican II “rad trad” stereotype pushed by the Vatican. When these newcomers think about Vatican II, which isn’t often, they see it as a historical event, not a super-council that must dominate their entire Catholic life. They do not consider the 1950’s an Immaculate Era to which we must return. They are just regular Catholics trying to live their Catholic faith in an age of confusion.