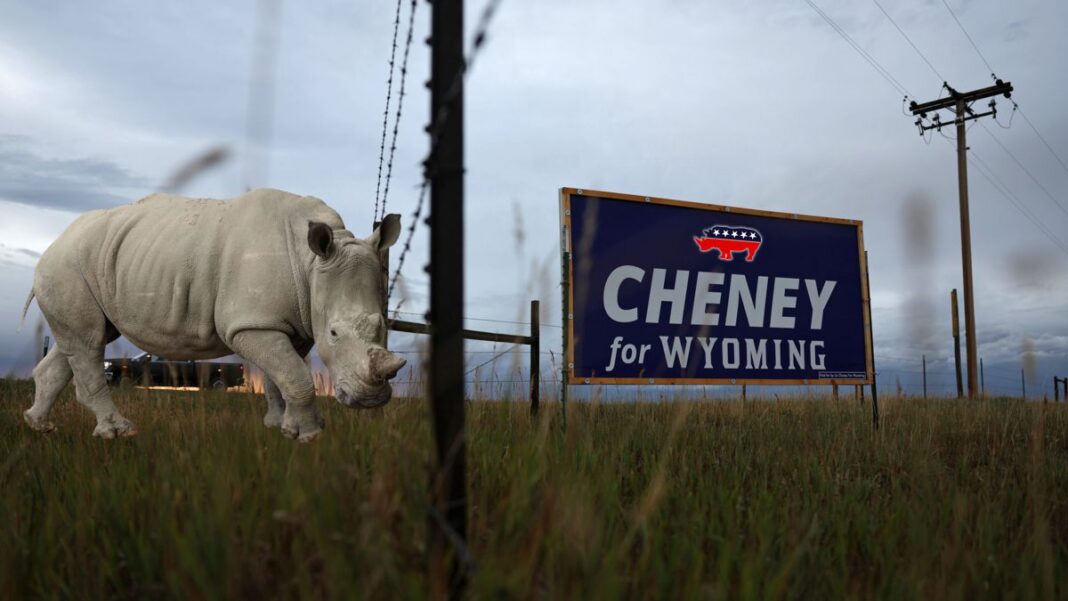 Last Tuesday night, the State of Wyoming was in the National and international spotlight as never before in history. And barring an apocalyptic eruption of the Great Yellowstone Volcano, will likely never be again. Rarely has any single Congressional or Senate race in any state held such potential as a turning point for America, on which its total collapse or eventual restoration as the “Land of the Free” might hinge.

The political contest in question was, of course, the Republican Primary race for the Cowboy State’s sole Congressional seat, currently held by incumbent RINO Liz Cheney. Thankfully, that will soon change. Cheney not only lost her bid for re-election, she was decisively trounced by Harriet Hageman, a relative novice on the political scene. Wyomingites turned out in huge numbers to vote against Cheney, and in so doing they sent a loud message to the D.C. Republican “Establishment” that they will no longer accept any more of the “business as usual” betrayals which have become standard fare.

Yet as big of a deal as this situation was in Wyoming, the rise or fall of an enormous, National political movement also hung in the balance. And behind closed doors, you can be sure that the RINO elitists are raging and plotting against Conservative America, now with even more venom and duplicity than before. It is unthinkable that those lowly backward peasants might dare to hold political hacks accountable, or expect them to actually advance the stridently conservative and pro-America ideals of the Republican Platform.

The political landscape is inexorably changing, and self-serving “Republican” elitists can squall with indignation all they want. This genie is not going back into the bottle. Their plan was to pour enough money into Cheney’s campaign, garner enough big name endorsements, and bask in fawning far-left Fake News coverage that Cheney has been receiving, to put her within shooting distance of a victory. Then, with the help of the thoroughly corrupted Wyoming primary process (a direct consequence of collaboration between RINOs and Democrats), Cheney might garner enough crossover votes on election day to push her over the top. Of course if that had occurred, the instant, massive coordinated media/Swamp response would be to declare that Wyoming “Conservatives” had embraced Cheney and spearheaded the nationwide rejection of Donald Trump.

Thankfully, none of that happened. And with Cheney’s loss, everything is changing. Given how Cheney actually wormed her way into the Congress, Tuesday’s drubbing represents an encouraging harbinger of good things to come across America. And it is this, more than any single individual or political contest, that stokes the worst fears and anger of RINO insiders.

Though Wyoming has long been overwhelmingly Republican according to voter registrations, the state party apparatus was anything but Conservative. Sadly, most voters focused on a couple of key issues, chiefly the Second Amendment and their aversion to a state income tax, but largely ignored politics otherwise. Opportunists in the Wyoming GOP thoroughly exploited that mindset, enriching themselves and their cronies off the state budget, and otherwise governing in many ways like a bunch of Vermont Democrats. High offices were most often hand-picked by the corrupt and self-serving “system,” with true grassroots Conservatives rarely winning against the thoroughly stacked deck.

Cheney epitomized all of this. Wyoming has a sordid history of political “Dynasties,” such as the Hanson/Meads, and Simpsons. Likewise, Cheney came from the “Dynasty” of her own notorious father Dick Cheney, enjoying a decisive advantage of fame and “privilege” without ever having been involved in the political process. In 2014, Cheney attempted to “Carpet Bag” her way into office by challenging then Senator Mike Enzi, a reliable Conservative who had held his seat since 1996. Amazingly, on that occasion Dick Cheney actually tried to promote her as the “Tea Party Candidate,” in hopes of connecting with the grassroots and unseating Enzi. The ruse fell flat. With abysmal polling numbers early in the primary season, she dropped out of the race, citing the usual platitudes of “family issues,” blah blah…

But the system was in place for her to regroup and be installed in the State’s vacated congressional seat in 2016. Not facing any incumbent opposition, she easily won. But as a creature of that system, she was immediately threatened by the concurrent electoral earthquake of Donald Trump’s election to the Presidency. Suddenly, Republicans weren’t expected to just play “opposition party” and stridently denounce Democrats in fund-raising letters. President Trump’s agenda was one of securing the border, restoring America’s manufacturing base and energy independence, reasserting American standing on the international scene, and in every respect, “Making America Great Again!” This was just not how things were supposed to work.

So Cheney jumped ship on President Trump and on the people of Wyoming, to join forces with the likes of Nancy Pelosi, Adam Schiff, Jerry Nadler, and other leftist Democrats to derail the President. It eventually became inescapably obvious that her entire strategy was one of self-aggrandizement and treachery, grandstanding in the wake of the January 6 episode as some sort of courageous guardian of the Constitution and the Rule of Law.

Of course she never exhibited such passion or resolve against the rampant lawlessness of the Democrats, as they fomented hundreds of riots across America, and weaponized major government institutions against “We the People.” The real “villain” was Donald Trump, and every effort to stop him, including the flagrantly stolen election of 2020 was somehow valid.

Since her loss, Cheney has been attempting to compare herself to Abraham Lincoln. No doubt when that pathetic joke fizzles, she’ll come up with a new namesake or two on which to grandstand. Joan of Arc perhaps?

Meanwhile, back in Wyoming, a groundswell of anti-RINO sentiment has totally shaken up the political landscape there. This is actually a continuation of a move that began in previous election cycles, but has gained enormous momentum this year, thanks in large part to Cheney’s treachery. This same primary that gave her the boot also saw the end of political careers for several other formerly entrenched RINOs in the State House and Senate, to be replaced by genuine Conservatives.

Without question, the single greatest accomplishment of the Trump Presidency was the unmasking of RINOs, and their “business as usual” betrayals of Conservatives who fought so hard to get them into office. But this is no time for a victory dance. The effort is only in its early stages, and needs to be diligently pursued until the Republican Party is truly restored to the principles on which it was founded, and for which it professes to stand.