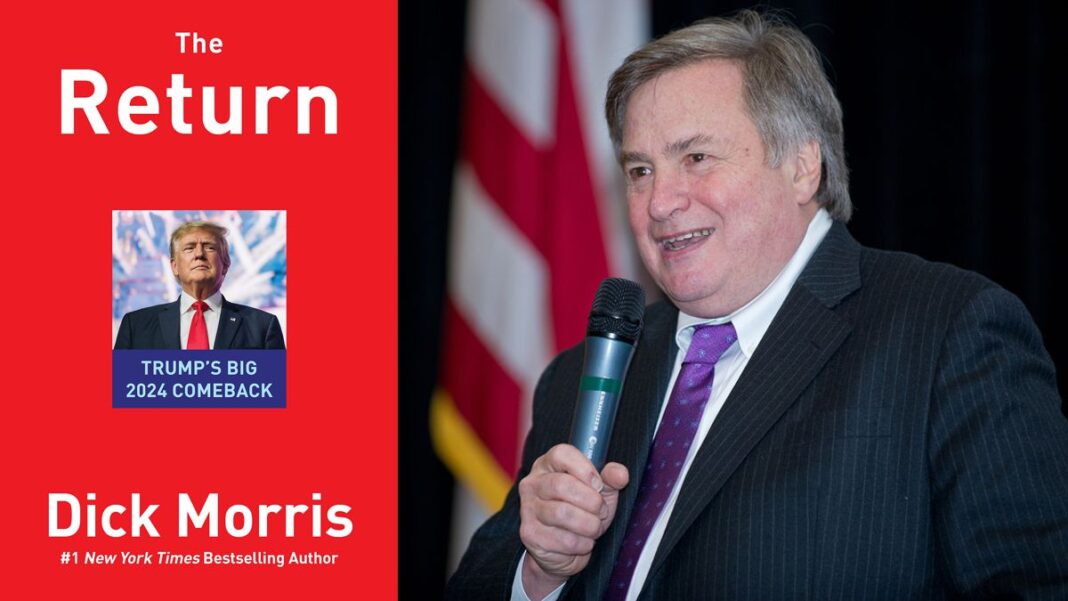 Will he be the GOP nominee? ABSOLUTELY.

Will he win the election? YES!

Dick Morris says the stakes of the next elections could not be higher.

In his new bestseller THE RETURN Morris explains that we cannot repeat 2020—and we can’t let the Democrats get away with it again or America is lost.

Dick Morris provides the road map that Trump is prepared to implement in his effort to take-back the White House and the nation. It’s all in THE RETURN.

Conservatives and MAGA supporters must realize that there are new rules. The Democrats, Big Media, Soros, and the Deep State have decided Trump must be stopped at any cost.

In THE RETURN Morris reveals how to beat the Democrats and the radical left at their own game – and getting freedom-loving Americans to rise up for Trump and our democracy.

Morris outlines the strategy for victory on three fronts:

With the election of 2020, everything pundits knew—or thought they knew—is obsolete in this new era of massively higher turnout.

Read THE RETURN to find out how conservatives can take advantage of the new rules to make America great again!

Praise for THE RETURN: TRUMP’S BIG 2024 COMEBACK by Dick Morris

“Dick Morris and I conferred regularly throughout the 2016 and 2020 campaigns. He helped me hone my message and aim it at the right audience. His father was my attorney, and he is my counselor. And I am grateful to them both.” — President Donald J. Trump

“I read Power Grab and couldn’t put it down. Dick Morris thoroughly reveals President Obama’s hidden agenda. This book is a must-read for all Americans.” — Ben Carson, neurosurgeon and politician who served as the 17th United States Secretary of Housing and Urban Development
–This text refers to the hardcover edition.

DICK MORRIS (NEW YORK, NY) served as Bill Clinton’s political advisor for twenty years. As America’s most prominent political consultant, Morris has helped lead the winning campaigns of more than thirty Senators and Governors; while internationally Morris has managed the successful campaigns of the presidents or prime ministers of Mexico, Colombia, Argentina, Uruguay, Kenya, Spain, and others.

A regular political commentator on NewsmaxTV and other networks and social media platforms, Morris is the author of thirteen New York Times bestsellers, including Armageddon: How Trump Can Beat Hillary and Power Grab: Obama’s Dangerous Plan for a One-Party Nation.

Dick Morris and lawyer Eileen McGann have co-authored more than nineteen books and have been married for over forty years.

CHAPTER ONE to THE RETURN: TRUMP’S BIG 2024 COMEBACK by Dick Morris

What Really Happened in 2020

To start our search, we must understand how the Democrats managed to turn out such a massive vote for one of the least electable people ever to run for president.

So frail, senile, and demented was Joe Biden that Democratic strategists used the threat of the COVID virus to keep their candidate in his basement, behind a mask, shielded from public view.

Nevertheless, the Democrats managed to win by expanding the size of the electorate.

The key change that impelled the huge rise in turnout was that the Democrats used the COVID virus pandemic to change the entire way elections are conducted.

The excuse for the massive change from in-person voting to casting ballots in absentia, or by mail, was the fear that bringing more than 150 million people out to vote in person on one day might kindle massive increases in case rate and deaths from COVID.

Even with the pandemic, roughly ninety million people chose to vote in person. If the dire warnings of Democrats were correct, we should have seen a spike in COVID deaths in the period immediately following Election Day.

If mail-in balloting didn’t save a lot of lives, it sure fundamentally altered how people chose to vote, with almost half the electorate eschewing in-person voting.

It opened the door wide to all kinds of mischief.

Arizona passed a law—before the 2020 election—prohibiting ballot harvesting. Only a family member or caregiver could cast a ballot on a voter’s behalf. Predictably, the Democrats sued, arguing that the law violated the Voting Rights Act. But in July 2021, the US Supreme Court upheld the statute, citing the possibility of fraud

Writing for the 6–3 majority, Justice Samuel Alito quoted the bipartisan Commission on Federal Election Reform chaired by former president Jimmy Carter and former secretary of state James Baker. The Carter-Baker Commission noted that “absentee balloting is vulnerable to abuse in several ways: . . . Citizens who vote at home, at nursing homes, at the workplace, or in church are more susceptible to pressure, overt and subtle, or to intimidation (emphasis added).”1

It has long been true that Republicans—with their more educated, motivated, industrious, patriotic, literate, and active voters—get out their vote more easily. But Democrats depend on getting downscale voters—minorities, teenagers, and couch potatoes—to vote. Paper ballots were made for them. If you don’t care enough to go out and vote, hey, just mail it in!

The more apathetic, uninvolved, uninformed, low-motivation people who cast ballots, the greater the chances of a Democratic victory—a fact the Democrats knew well as they used the phony narrative of the COVID threat to induce mail-in voting.

We must beat them under the new rules!

Don’t pin your hopes on rolling the clock back to the days of limited turnouts. Embrace the high-turnout elections—just be sure we win.

After all, we Republicans have our share of couch potatoes, too! We don’t need to cheat, or forge ballots, or help voters “cure” defective ballots. We can let the dead stay buried without casting votes in their names. Nor do we need to cast ballots in the names of those who have moved away.

We only need to dig deeper and focus on those who support us but didn’t vote—people who took prosperity and jobs for granted and figured Trump had it in the bag.

We need to beat the Democrats by using the paper and absentee voting they pioneered in 2020. In 2020, about three in four absentee ballots were cast for Biden. In a pivotal state like Georgia, 80 percent of the paper ballots deposited in drop boxes (installed by Democrats and funded by Facebook founder Mark Zuckerberg) went for Biden.

Let’s turn that around! No longer can we sit back and wait for Election Day! We must beat them on mail-in ballots and absentee votes every day of early voting. For us, now, Election Day is every day in October, and in some states, in September, too.

We have to scrounge for votes during the weeks and months before the election—as frantically as when the clock tells us the polls will close in two hours.

While ballot irregularities doubtless contributed to the Democratic victory in 2020, it was far from the whole story. Sure, there were many forged ballots cast in phony names, and many ballots that were altered by Democratic poll workers in the name of “curing” their defects. But the fact is, we ultimately lost because the Democrats got more legal, eligible voters to cast ballots than we did.

We must not lazily claim that cheating cost us the election, and assume that if we fix it by new legislation or administrative reforms or better poll watchers, that will magically produce Republican victories in 2022 and 2024. Nor dare we retreat into a nihilistic cynicism and refuse to vote at all. We see now what are the consequences of Democratic control.

Democrats won because they dug deeper to get votes by bringing ballots to their voters’ front doors and collecting them—then and there—while we tried to get our people to go to the polls in person.

As any pizza delivery boy will tell you, home delivery beats going out, every time.

Paper ballots are here to stay, as are early voting and broader use of absentee ballots. We must adjust and win under the new rules.

How Did the Democrats Do It?

The Democrats won because:

All the while, Republicans played by the old rules, pushing for in-person voting and relying on the electoral system to screen out illegal ballots. The Republican Party worked, with astonishing success, to bring out their vote to the polls while the Democrats went door-to-door to encourage people to stay home and cast absentee ballots.

The Republicans worked their heads off, but home delivery—voting by paper ballots, at home—prevailed.

Now we have to win by using the new rules.–This text refers to the hardcover edition.