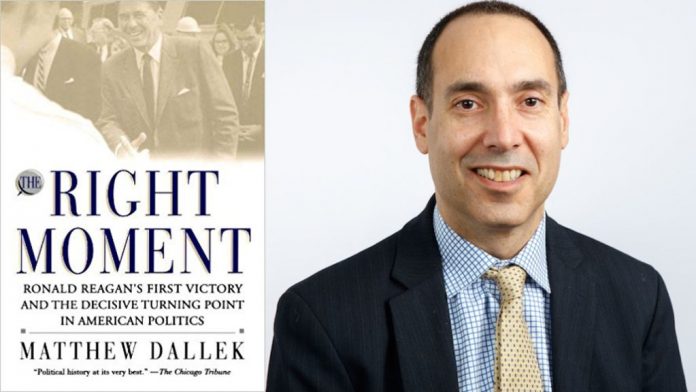 Ronald Reagan’s first great victory, in the 1966 California governor’s race, seemed to come from nowhere and has long since confounded his critics. Just two years earlier, when Barry Goldwater lost to Lyndon Johnson by a landslide, the conservative movement was pronounced dead. In California, Governor Edmund “Pat” Brown was celebrated as the “Giant Killer” for his 1962 victory over Richard Nixon. From civil rights, to building the modern California system of higher education, to reinventing the state’s infrastructure, to a vast expansion of the welfare state, Brown’s liberal agenda reigned supreme. Yet he soon found himself struggling with forces no one fully grasped, and in 1966, political neophyte Reagan trounced Brown by almost a million votes.

Reagan’s stunning win over Brown is one of the pivotal stories of American political history. It marked not only the coming-of-age of the conservative movement, but also the first serious blow to modern liberalism. The campaign was run amidst the drama of the Berkeley Free Speech Movement, terrible riots in Watts, and the first anti-Vietnam War protests by the New Left. It featured cameo appearances by Mario Savio, Ed Meese, California Speaker Jesse “Big Daddy” Unruh, and tough-as-nails Los Angeles Police Chief William Parker. Beneath its tumultuous surface a grassroots conservative movement swelled powerfully. A group that had once been dismissed as little more than paranoid John Birchers suddenly attracted a wide following for a more mainstream version of its message, and Reagan deftly rode the wave, moving from harsh anticommunism to a more general critique of the breakdown of social order and the failure of the welfare state. Millions of ordinary Californians heeded his call.

Drawing on scores of oral history interviews, thousands of archival documents, and many personal interviews with participants, Matthew Dallek charts the rise of one great politician, the demise of another, and the clash of two diametrically opposing worldviews. He offers a fascinating new portrait of the 1960s that is far more complicated than our collective memory of that decade. The New Left activists were offset by an equally impassioned group on the other side. For every SDS organizer there was a John Birch activist; for every civil rights marcher there was an anticommunist rally-goer; for every antiwar protester there were several more who sympathized with American aims in Southeast Asia. Dallek’s compelling history offers an important reminder that the rise of Ronald Reagan and the conservatives may be the most lasting legacy of that discordant time.

“Built on prodigious research in manuscript papers and oral history, grounded in sound judgment and fair-minded assessments, and sustained by a lively, fast-paced narrative full of vivid characters and telling anecdotes, The Right Moment represents political history at its very best.”–The Chicago Tribune

“[Dallek] succeeds admirably in tracing the roots of the Reagan phenomenon to the turmoil of the 1960s.”–The New York Times Book Review

“What I admire most about The Right Moment…aside from the clear, compelling, page-turning quality of Mr. Dallek’s writing, is his ability to weave ideas, personalities, national trends, California political history and Sacramento insider politics into one seamless whole in less than 250 pages of text.”–The Washington Times

“Gripping. In the place that brought us Watts riots and the Berkeley Free Speech movement, Mario Savio and Huey P. Newton, Hollywood and holistic health, another 1960s was playing out. Largely dismissed by commentators at the time and ignored by historians afterward, a new conservative order was rising.The story of California [through its] savvy right wing. “–The Washington Post Book World

“A refreshing and well-written book, and it tells a good story. Dallek shows Reagan not as an empty-headed actor memorizing lines, but as an intensely serious right wing ideologue, and a gifted proponent of his views. “–The Washington Monthly

Matthew Dallek, a former speechwriter for Richard A. Gephardt, earned his Ph.D. in American History from Columbia University in 1999. His articles and reviews have appeared in The Washington Post, The Atlantic Monthly , The New Republic, and other national publications. He lives in Washington, D.C.