Home Previews Books The Sleepwalkers: How Europe Went to War in 1914 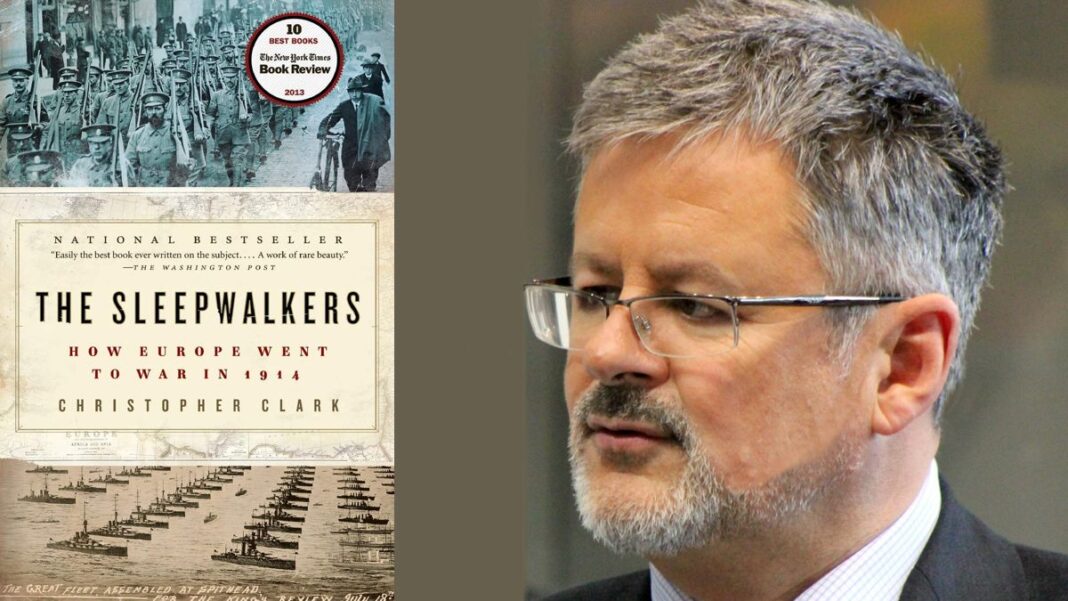 The Sleepwalkers is historian Christopher Clark’s riveting account of the explosive beginnings of World War I.

Drawing on new scholarship, Clark offers a fresh look at World War I, focusing not on the battles and atrocities of the war itself but on the complex events and relationships that led a group of well-meaning leaders into brutal conflict. Clark traces the paths to war in a minute-by-minute, action-packed narrative that cuts between the key decision centers in Vienna, Berlin, St. Petersburg, Paris, London, and Belgrade, and he examines the decades of history that informed the events of 1914 and details the mutual misunderstandings and unintended signals that drove the crisis forward in a few short weeks.

Meticulously researched and masterfully written, The Sleepwalkers is a dramatic and authoritative chronicle of Europe’s descent into a war that tore the world apart.

“An important book. . . . One of the most impressive and stimulating studies of the period ever published.” — Max Hastings, The Sunday Times

“Excellent. . . . The book is stylishly written as well as superb scholarship. No analysis of the origins of the First World War will henceforth be able to bypass this magisterial work.” — Ian Kershaw, BBC History

“The most readable account of the origins of the First World War since Barbara Tuchman’s The Guns of August. The difference is that The Sleepwalkers is a lovingly researched work of the highest scholarship.” — Niall Ferguson

“This compelling examination of the causes of World War I deserves to become the new standard one-volume account of that contentious subject.” — Foreign Affairs

“Clark is a masterly historian. . . . His account vividly reconstructs key decision points while deftly sketching the context driving them. . . . A magisterial work.” — The Wall Street Journal

“A monumental new volume. . . . Revelatory, even revolutionary. . . . Clark has done a masterful job explaining the inexplicable.” — The Boston Globe

“Easily the best book ever written on the subject. . . . A work of rare beauty that combines meticulous research with sensitive analysis and elegant prose. The enormous weight of its quality inspires amazement and awe. . . . Academics should take note: Good history can still be a good story.” — The Washington Post

“Superb. . . . One of the great mysteries of history is how Europe’s great powers could have stumbled into World War I. . . . This is the single best book I have read on this important topic.” — Fareed Zakaria

“A thoroughly comprehensive and highly readable account. . . . The brilliance of Clark’s far-reaching history is that we are able to discern how the past was genuinely prologue. . . . In conception, steely scholarship and piercing insights, his book is a masterpiece.” — Harold Evans, The New York Times Book Review

On the morning of June 28, 1914, when Archduke Franz Ferdinand and his wife, Sophie Chotek, arrived at Sarajevo railway station, Europe was at peace. Thirty-seven days later, it was at war. The conflict that resulted would kill more than fifteen million people, destroy three empires, and permanently alter world history.

The Sleepwalkers reveals in gripping detail how the crisis leading to World War I unfolded. Drawing on fresh sources, it traces the paths to war in a minute-by-minute, action-packed narrative that cuts among the key decision centers in Vienna, Berlin, St. Petersburg, Paris, London, and Belgrade. Distinguished historian Christopher Clark examines the decades of history that informed the events of 1914 and details the mutual misunderstandings and unintended signals that drove the crisis forward in a few short weeks.

How did the Balkans—a peripheral region far from Europe’s centers of power and wealth—come to be the center of a drama of such magnitude? How had European nations organized themselves into opposing alliances, and how did these nations manage to carry out foreign policy as a result? Clark reveals a Europe racked by chronic problems—a fractured world of instability and militancy that was, fatefully, saddled with a conspicuously ineffectual set of political leaders. These rulers, who prided themselves on their modernity and rationalism, stumbled through crisis after crisis and finally convinced themselves that war was the only answer.

Meticulously researched and masterfully written, The Sleepwalkers is a magisterial account of one of the most compelling dramas of modern times.

Christopher Clark is a professor of modern European history and a fellow of St. Catharine’s College at the University of Cambridge, UK. He is the author of Iron Kingdom: The Rise and Downfall of Prussia, 1600-1947, among other books.