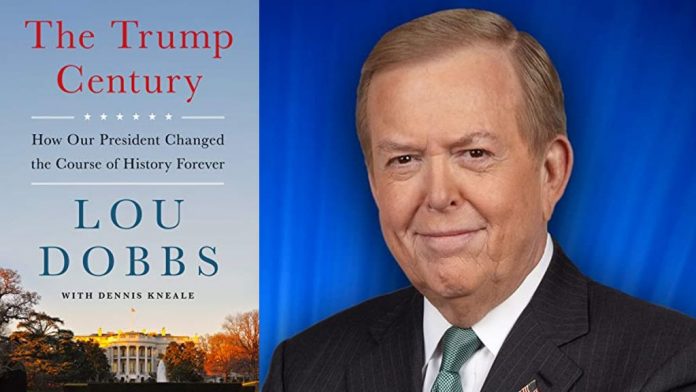 As the 21st Century began, the world’s only superpower was economically adrift, policing the world at the expense of American lives and trillions of dollars, weighed down by one-sided trade and security agreements with Europe and China ratified in a different era.

Elites of both political parties battled over who would manage America’s decline from preeminent world power.

In The Trump Century, the indomitable Lou Dobbs explains how Trump has steered the debate every day he has been in politics, greatly expanding what Washington thinks is possible. By 2016, the globalist elites demanded no one speak about limiting illegal immigration or securing our borders. The elites told you communist China would soon be like us, and the PC orthodoxy told you what you could or could not say. You were told America’s Middle Class could never grow again and wages would be stagnant into perpetuity. Trump reversed all of that as radical Democrats and the Deep State conspired to overthrow his Presidency, as the deadly pandemic raged, and orchestrated street protests and violent riots dominated news headlines.

He has not only made America great again but created a new standard for all future Presidents and likely has set the American agenda for the next hundred years.

The Trump Century opens a window into Trump’s thinking on the economy, foreign policy, and border security and will energize his allies when they realize the future they’ve shaped.

“Lou Dobbs hits the mark in this thoughtful and reasoned book. President Trump changed the course of history in such a dramatic and profound way that future presidents, no matter their party affiliation, are going to be making their case based on the direction Donald Trump took the nation. ‘America First’ was the president’s agenda and Lou Dobbs walks us through how it will change America for the better now and throughout our lifetime. A great read that makes such profound sense.” (Jason Chaffetz)

“Today’s leftists are hoping for a revolution, but they’ve missed the revolution that has already come. As The Trump Century fascinatingly shows, the president has so transformed the way we talk about war, allies, and trade agreements that it’s impossible to imagine ever going back. It’s a perfect antidote to the manipulative media.”  (Sara A. Carter)

Lou Dobbs is the New York Times bestselling author of six books, and the host of the #1 news program on business television, Lou Dobbs Tonight, on Fox Business Network. He is also the host of nationally syndicated “Lou Dobbs Financial Reports,” airing on the radio daily. Named “TV’s Premier Business News Anchorman” by the Wall Street Journal, Dobbs has numerous Emmys, a CableACE Award, a Peabody Award, and many other distinguished honors.

Dennis Kneale has over thirty years of experience in journalism from Forbes and the Wall Street Journal to anchor for CNBC and Fox Business. He is the CEO of Dennis Kneale Media, providing content, training, strategy, and investment advice.