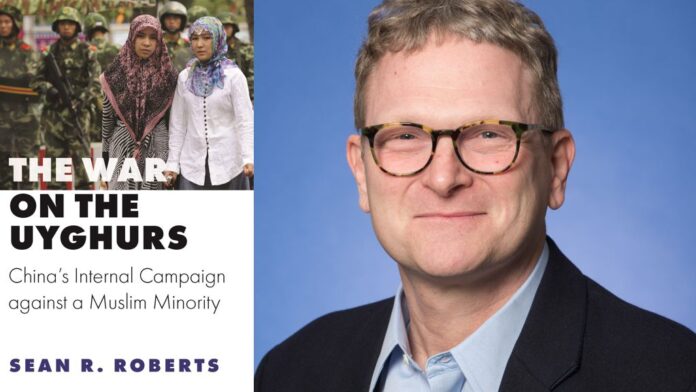 The War on the Uyghurs: China’s Internal Campaign against a Muslim Minority tells How China is using the US-led war on terror to erase the cultural identity of its Muslim minority in the Xinjiang region

Within weeks of the September 11 attacks on New York and Washington, the Chinese government warned that it faced a serious terrorist threat from its Uyghur ethnic minority, who are largely Muslim. In this explosive book, Sean Roberts reveals how China has been using the US-led global war on terror as international cover for its increasingly brutal suppression of the Uyghurs, and how the war’s targeting of an undefined enemy has emboldened states around the globe to persecute ethnic minorities and severely repress domestic opposition in the name of combatting terrorism.

Of the eleven million Uyghurs living in China today, more than one million are now being held in so-called reeducation camps, victims of what has become the largest program of mass detention and surveillance in the world. Roberts describes how the Chinese government successfully implicated the Uyghurs in the global terror war―despite a complete lack of evidence―and branded them as a dangerous terrorist threat with links to al-Qaeda. He argues that the reframing of Uyghur domestic dissent as international terrorism provided justification and inspiration for a systematic campaign to erase Uyghur identity, and that a nominal Uyghur militant threat only emerged after more than a decade of Chinese suppression in the name of counterterrorism―which has served to justify further state repression.

A gripping and moving account of the humanitarian catastrophe that China does not want you to know about, The War on the Uyghurs draws on Roberts’s own in-depth interviews with the Uyghurs, enabling their voices to be heard.

Over one million have been arbitrarily detained in a vast network of detention facilities that the authorities refer to as “re-education centres”, which offer “vocational training” and which, with no hyperbole, can be called concentration camps. Within them every moment of the detainees’ life is regulated; they must endure ideological programming sessions coupled with threats and intimidation. As for the remaining eleven million or so Uighurs outside the camps, they are subjected to intensive human and digital surveillance, even in their homes, where visiting officials quiz children about the religious habits of their parents. Prominent Uighur academics and artists have been arrested; mosques and sacred sites have been destroyed. There have also been reports of sterilization campaigns and forced labour programmes, especially in clothing and textiles (Xinjiang produces 7 per cent of the world’s cotton).
The Chinese government justifies these measures by arguing that it is trying to combat “religious extremism” and terrorism. Shortly after 9/11 China began to argue that it faced a substantial, organized terrorist threat and needed to take measures to protect itself. It cited lists of violent incidents and linked numerous Uighur organizations with al-Qaeda. Sean Roberts’s timely and important book, The War on the Uyghurs, dissects the emergence and evolution of this claim, how it affected policy in the region, and its relation to the broader narrative of the Global War on Terror. Roberts argues that “it has been the international obsession with combating a vaguely defined ‘terrorist’ enemy” that has allowed China “to implement these measures with impunity”.
– Nick Holdstock, London Times Literary Supplement (09/25/2020) the-tls.co.uk/articles/war-on-the-uyghurs-sean-roberts-book-review-nick-holdstock/

Perhaps Roberts’s greatest contribution to the debate over Xinjiang is his attempt to dismantle China’s assertions about a “terrorist threat” by sketching a picture of the isolated groups it deems international terrorist organisations. Through interviews in Uighur communities, he concludes that the groups have for the past two decades mostly hovered on the edge of extinction as a poorly resourced, loosely organized bunch with aspirations, but no capacity, to launch militant operations.- Christian Shepherd, The Financial Times ft.com/content/6cceb0c1-dc43-48a4-81cc-2debcac0148a

“This is the backstory behind one of the biggest stories in China―the incarceration of more than one million Uyghurs in a dystopian network of what are claimed to be reeducation camps. Who the Uyghurs are and how they came to be classified as terrorists is a story authoritatively told by Sean Roberts, who has spent three decades studying the Uyghurs and speaks the language. The publication of The War on the Uyghurs could not be more timely.”―Barbara Demick, former Beijing bureau chief, Los Angeles Times, author of Nothing to Envy

“Sean Roberts has done an immense service for all those who need to put headlines about Chinese repression of Uyghurs in recent years in proper context. Describing how the rhetoric and practices of ‘global war on terror’ since 2001 have led to the mass internment, persecution, and surveillance of the population, Roberts shows that the Chinese campaign has chillingly aimed at nothing less than the destruction of Uyghur identity. This account is masterful, and educational and enraging by turns.”―Samuel Moyn, author of Not Enough: Human Rights in an Unequal World

“This book should act as a wake-up call for policymakers worldwide. Armed with the piercing and detailed analysis of the recent past in East Turkistan, and the graphic accounts of the present, no one has any further excuse for failing to grasp the full reality of the human tragedy that is taking place. Roberts demystifies the background, debunks the false excuses of the Chinese state, and presents the reality of the persecution unfolding before our eyes. None of us can afford to look away.”―Ben Emmerson, QC, former United Nations special rapporteur on counter-terrorism

“Sophisticated, nuanced, and deeply informed. Roberts offers broad insights into the ways the global war on terror has enabled authoritarian regimes around the world to repress minority populations.”―Michael E. Clarke, author of Xinjiang and China’s Rise in Central Asia―A History

“Roberts provides a comprehensive explanation for the current arbitrary mass detention of Uyghurs in China, an issue of global geopolitical significance. His book will likely become a standard reference for students on this topic.”―Max Oidtmann, author of Forging the Golden Urn: The Qing Empire and the Politics of Reincarnation in Tibet

“Based in a deep understanding of realities on the ground, Roberts’s analysis of the interaction between China’s settler colonialism and indigenous Uyghur resistance over the past ten years is far richer than what has been offered anywhere else. This is an extremely timely book, and badly needed.”―Rian Thum, author of The Sacred Routes of Uyghur History

Sean R. Roberts is associate professor of the practice of international affairs and director of the International Development Studies Program at George Washington University’s Elliott School of International Affairs. He lives in Washington, DC. Twitter @robertsreport